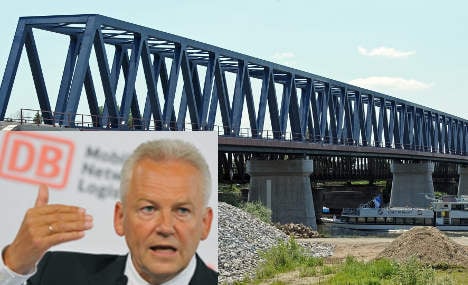 Sections of the rail network would have to be closed in the near future, Bahn CEO and chairman Rüdiger Grube warned on Monday.

He told business magazine Wirtschaftswoche that 1,400 bridges needed urgent repairs and that his tight budget meant some would simply have to be closed. "Sadly we are no longer far away from this," he said.

"With current funding we can only do 125 bridges."

The closure of one particular bridge at Frankfurt's main station would necessitate trains across the country being re-routed, causing delays totalling 33,000 minutes a day.

Grube told the magazine that on average a rail bridge lasted 100 years but almost a third of the country’s 25,000 bridges were older than that.

This summer has been a difficult one for Deutsche Bahn. Services were thrown into chaos around the Rhineland hub of Mainzin August and September due to a shortage of signal box operators and high-speed trains were barred from the Berlin-Hannover route for five months due to flood damage.

In the interview Grube also said that Deutsche Bahn expected profits this year to be significantly down from last year's €2.6 billion, but that it would still top €2 billion.