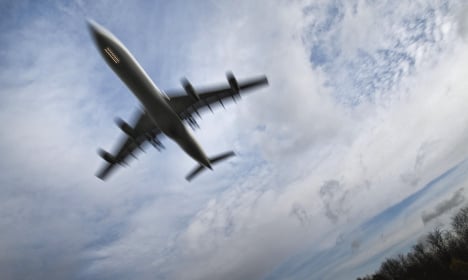 Flying from Germany could get cheaper. Photo: Frank Rumpenhorst/dpa

Members of the transport group decided on Thursday during coalition talks between Chancellor Merkel’s conservatives and the Social Democrats (SPD) to abolish air passenger duty, which applies to departures from German airports, the Bild newspaper reported.

But the final decision on whether or not the duty is scrapped will fall to party leaders and depend on the SPD and Merkel’s conservative bloc forming a coalition government. Negotiations are still ongoing.

The tax was introduced in Germany two years ago but the parties believe that it is costing the country more money than it brings in as passengers are put off flying from German airports by the high cost of travel.

If the duty is abolished, ticket prices would be reduced by €7.50 on short-haul journeys, €23.43 on medium-haul and slashed on long-haul flights by €42.18, the Bild said.

Air passenger duty is higher in other European countries such as Britain which, behind Chad, is the world’s second most expensive country to fly from, according to research by the World Economic Forum published in March this year.

In the US, international flyers are charged $13.40, the State Department’s website shows.

When Germany’s tax was introduced in 2011 CDU Finance Minister Wolfgang Schäuble bore the brunt of considerable criticism from the CDU’s then coalition partners the Free Democratic Party (FDP).

But the mark-up on ticket prices helped shore up the budget and contributed almost €1 billion to the treasury every year, according to Bild.

The tax was also seen as an important move by environmental groups to make flying more expensive.

When the German parliament took the decision to introduce the tax in November 2010, a statement from Bund, Germany’s branch of Friends of the Earth, called it “one of the few measures for more climate protection in the transport industry.”

In response to plans to abolish the tax, the organization issued a statement urging the coalition to maintain and increase the duty.

“The air passenger duty does not lead to the exodus of passengers to foreign airports or to the loss of jobs in airlines as the Federal Association of the Air Travel Industry (BDL) claims," it said.

“In order to develop a guiding impact and generate additional income for the financing of environmental protection in developing countries, air passenger duty must be increased further,” the NGO argued.

But the BDL, which has campaigned against passenger duty since its introduction, stands fully behind the tax cut.

It claimed that in 2012 Germany’s five biggest airline companies lost €513m to the government through the tax.

The body’s president Klaus Peter Siegloch said on Tuesday the increase in ticket prices was “a considerable burden for the German flight industry and airports,” Bild reported.

The association points to the fact that air traffic has increased faster in neighbouring countries than it has in Germany, despite the fact that these states have weaker economies.