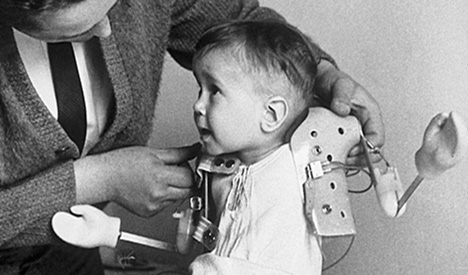 A child affected by thalidomide is fitted with prothestic arms. Photo: DPA

The Spanish victims' group that brought the suit said it would be the first time ever that the German firm Grünenthal had been ruled responsible for the scandal, although it has already compensated some victims.

The case was the first suit brought in Spain against the manufacturer of the morning sickness drug which the plaintiffs said caused birth defects in up to 3,000 Spanish babies.

Avite, an association representing Spaniards born with severe defects after their mothers took the drug during their pregnancies, had sought compensation of €204 million euros for its members.

In a written ruling dated Tuesday, the court said it convicted Grünenthal and sentenced it "to compensate each one of the plaintiffs" to tens of thousands euros each, depending on the severity of their disability, and to pay legal costs.

It did not specify exactly how many plaintiffs there were nor how much the compensation and costs would add up to in total. Avite claims to have 180 members.

Dozens of Spaniards born with defects caused by thalidomide, many in wheelchairs or on crutches, attended the trial in Madrid last month.

Thalidomide was originally marketed as a sedative, but from the late 1950s was prescribed to women around the world to combat morning sickness.

Many of the children of the mothers who took the drug were born with abnormally short limbs and in some cases without any arms, legs or hips.

In late 1961 the drug was withdrawn from the British and German markets, but it continued to be sold in other countries including Canada and Japan for months more.

Avite said it remained available in Spain until 1965.

Grünenthal did not publicly apologise for the scandal until 2012.

Avite said in a statement ahead of the trial that it hoped the "historic lawsuit (would) appease the suffering of Spanish victims, which began in their mothers' wombs and continues today, with the amputation of their arms and legs".