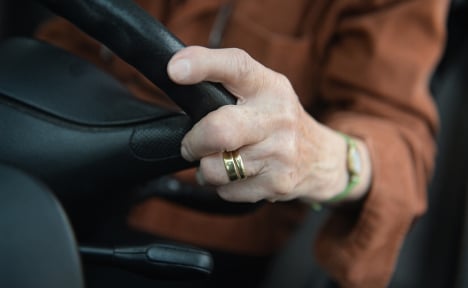 The cars all had damage to their bodywork. Photo: DPA

Police in the capital said the 86-year-old driver hit and damaged the six vehicles as he attempted to manoeuvre his car from a parking space on Tuesday at around 11am in Hölderlinstraße in the Westend district.

The man reversed into three cars behind him, knocking them into one another. Then the elderly driver ploughed into the car in front, ramming it into two other parked vehicles.

His wife watched from the pavement in dismay.

When the 79-year-old woman tried to intervene she was also dragged into the parking fiasco.

As she opened the passenger door to check on her husband, the pensioner reversed suddenly, hitting his wife with the open door and dragging her with him.

The woman tumbled, sustaining arm, leg and hip injuries. Her husband, who was in a state of shock following the incident, hit his head. The couple were taken to hospital and treated for their injuries, police said.

The man’s car and the six he hit all had damage to their bodywork.