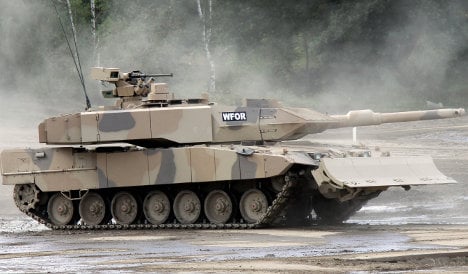 A deal to buy 270 Leopard 2 tanks from Germany did not go through. Photo: DPA

The Gulf state, which has a poor human rights record, spent around €1.2 billion of the nearly €5 billion sales made by the government on exporting military hardware.

Saudi Arabia bought gun laying equipment and weapons sights, as well as missile steering technology. It had planned to buy 270 armed tanks but the deal fell through.

The report will be presented in front of Germany’s cabinet on Wednesday, when politicians will hear which countries are benefiting most from Germany's active arms industry.

While military equipment sales have dropped, the sale of weapons has gone up. In 2012, pistol and machine gun sales to countries outside of EU and NATO rose from €17.9 million in 2011 to €37 million.

Angela Merkel's Christian Democratic Union and the centre-left SPD who are in coalition talks decided during negotiations that the gun trade needed to be more strictly controlled by the next government.