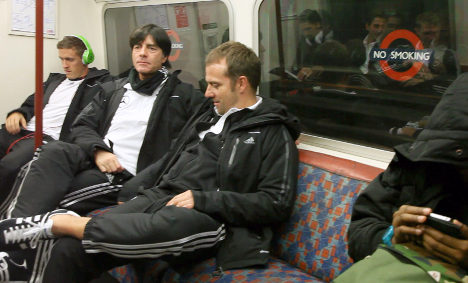 Joachim Löw and his team took the underground to training on Monday. Photo: Handout/DPA.

London train-goers were given a surprise when Germany's 19-man squad including coach Joachim Löw jumped on the tube at their hotel in the city centre and headed north to their training ground at Wembley.

The German team is in the English capital ahead of Tuesday night’s match against Roy Hodgson's side.

The friendly fixture has been organized to celebrate the FA's anniversary and to mark the occasion London has temporarily renamed its underground stations after past football stars.

Embankment, where the team began their 40-minute tube journey, has been renamed 'Des Walker' after the England striker who won 59 caps for the Three Lions from 1988 and 1993.

German footballers have also been honoured with Franz Beckenbauer, Didi Hamann and Jürgen Klinsmann all having a stop named after them.

Borussia Dortmund goalkeeper Roman Weidenfeller will win his first cap and Löw has confirmed that Marcel Schmelzer, Per Mertesacker, Sven Bender and Marco Reus will all start.

The coach has defended his experimental line-up, insisting it is not a sign of disrespect, following criticism in the English media that he was fielding a B-team.

"It was clear to me that I needed to experiment a bit and send home some of the players that for us are firmly established," said Löw in a press conference on Monday.

"It was a deliberate acid test for these young, up-and-coming players and it's definitely not the case that we're fielding a 'B team' as any lack of respect towards our hosts.

"Let me remind you that in 2008 we hosted England in November in Berlin and England played without [Wayne] Rooney, [Steven] Gerrard, or [Frank] Lampard and beat us 2-1, so there's no such thing as a B or an A team for us."

Meanwhile, England captain Steven Gerrard has vowed his side will not be humiliated by Germany in the friendly.

Gerrard was a member of the England side that crashed out of the 2010 World Cup after a 4-1 defeat by their old rivals in South Africa.

England were outclassed in Bloemfontein by Joachim Löw's men – but Liverpool midfielder Gerrard warned Germany not to expect such an easy ride in London.

Ahead of equalling Bobby Moore's record of 108 England caps, Gerrard said: "I would say we are (better) now, and the reason I say that I feel that if we were to meet Germany tomorrow in a World Cup situation I don't think we would leave the pitch having been beaten 4-1.

"I do feel we are a lot stronger. There is a good mix of youth and experience in the squad at the moment. We are all moving forward and improving all the time.”