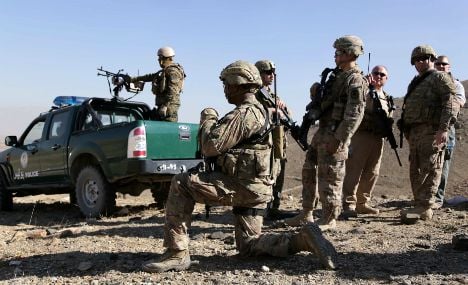 The Süddeutsche newspaper published an investigation in its Friday edition into America’s foreign policy and wars being conducted from German soil.

It claimed: “The U.S. knows no limits. And Germany looks on—even asking where it can help.”

But on Friday afternoon the US Embassy’s press department in Berlin took the unusual step of sending out a statement attacking the "outrageous" claims.

It described the story as “full of half-truths, speculation, and innuendo".

The statement said: “For many decades there have indeed been military facilities in Germany for our mutual security under Status of Forces Agreements, but the fact that they are closed to the public in no way implies that illegal activities are being organized there.

“Although we do not comment on specifics, as a matter of policy the United States does not engage in kidnapping and torture, and does not condone or support the resort to such illegal activities by any nation.

“Germany is one of the closest allies and partners of the United States, cooperating in areas ranging from counter-terrorism to international economic sustainability.  Outrageous claims like those raised in this article are not helpful to the German-American relationship and to our shared global agenda.”

The story in the Süddeutsche was particularly critical of the US drone war which it described as a “massive break with international law”, as well as its use of private firms to conduct spying operations.

The newspaper launched the investigation with public broadcaster NDR and said it had spent months trying to shine a light on the secrets.

It argued: “German agencies and politicians have obviously gotten used to American intelligence and military right here in their own backyard: tapping, code cracking, recruiting informants, observing suspects, kidnapping and abducting foreign enemies. The Germans have known all that for years.

“There’s no war in Germany. But where the U.S. army and intelligence agencies once protected the West during the Cold War, they now lead a worldwide secret war—a massive breach of international law.

“American soldiers—on bases in Ramstein and Stuttgart—are conducting a bloody drone war in Africa from within Germany.”

It argued that without German bases, America’s ‘war on terror’ “would not be the well-oiled machine it is now.”

“Germany acts as the headquarters for secret wars in Africa, the European hub for CIA operations and the training ground for drone attacks worldwide. And Germany’s location is indispensable,” it argued.

READ MORE: German trust in US battered by spying