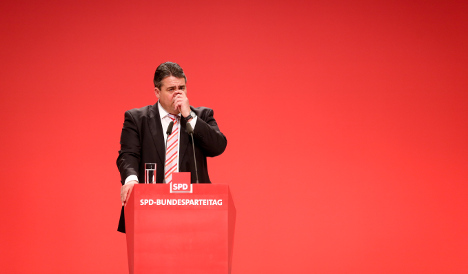 Sigmar Gabriel said there would be no "rotten compromises" in coalition talks with Merkel's conservatives. Photo: DPA

Three weeks into tough talks on a left-right tie-up, Sigmar Gabriel, 54, cautioned that any future coalition deal would not include all the Social Democratic Party's (SPD) demands but it could still make a difference to people's lives.

He sought to reassure some 600 delegates at a congress in the eastern city of Leipzig, after the SPD's second worst general election result in September that the party was not headed for a repeat of its previous grand coalition with Merkel.

"The SPD can achieve a lot for people in Germany in these coalition negotiations. But it may not play all or nothing," said Gabriel, who would likely ascend to be Merkel's vice chancellor in a coalition government.

He said anyone expecting "100 percent of the SPD election manifesto" to be included in a coalition deal "expects too much" but added: "We will only accept good and not any rotten compromises."

At the congress 83.6 percent of SPD members voted Gabriel back as party leader – eight percent fewer than two years ago.

Amid scepticism among SPD members, the 150-year-old party is wrangling with Merkel's Christian Democratic Union (CDU) and its CSU Bavarian allies over policy and portfolios to pave the way for a grand coalition following September elections.

Bitter disappointment over the party's last left-right partnership withMerkel in 2005-09 is still fresh in many SPD minds but Gabriel has pledged to give the 470,000-strong membership the final say on joining another one.

"We will not pursue politics for a second time in which the SPD again breaches its self-concept," he said in an almost 90-minute address, his last chance to rally the troops before the referendum set to kick off on December 6th.

If approved, it would be a "temporary coalition of businesslikerationality", he said.

Reiterating a key electoral pledge, Gabriel said a minimum wage of €8.50 an hour was among the SPD's 'must' issues.

He also eyed a government with a fairer labour market, fighting old-age poverty, investment for training and infrastructure, more equality for same-sex couples and the switch from nuclear to renewable energy at its core.

Holding up his hands over the party's electoral trouncing, Gabriel probed the reasons, saying there appeared a need for the SPD to demonstrate stronger economic expertise alongside its competence on social issues.

"Without it we won't be successful," he said.

With a November 27th deadline looming, an overall deal between SPD and CDU/CSU negotiators remains elusive despite a handful of agreements, including on European policy and rent control in some cities.

SPD general secretary Andrea Nahles warned in Thursday's Frankfurter Rundschau newspaper of "still almost insurmountable" differences in some areas, adding both sides wanted a deal "but we still have a fair stretch ahead of us".

Spiegel Online news site applauded Gabriel for restoring strong leadership to the SPD but said it was palpable in Leipzig that "The SPD is a party in fear."

SPD member Oliver Urban, 46, from Borna near Leipzig, told AFP that he expected members to vote 'yes' in the end, despite sensing opposition currently.

"Today my gut feeling is that people in my constituency are more for 'no'. What's important for us is east-west pension adjustment," he said, referring to the lower rate paid to seniors in the former communist regions of the country.

Student Sebastian Fiedler, 25, from Kassel, described the members' vote as a "super idea" but said he did not know yet which way he would vote. "It depends on the coalition agreement," he said.

The SPD is also set to vote on a motion that would open the door to a possible coalition with the far-left Linke party in future, an alliance the SPD has long rejected, considering the Linke, with roots in East German communism, too extreme.