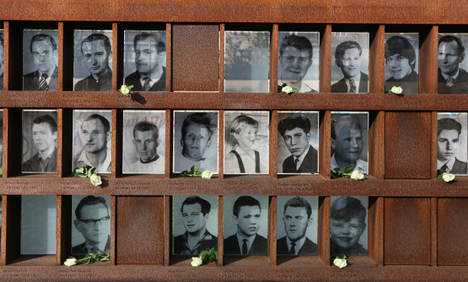 Victims of the Wall are commemorated in the city. Photo: DPA

Between the wall going up in 1961 and it falling in 1989, 137 people officially died trying to cross from communist East Berlin into the west of the city. The majority of those killed were shot, bled to death on barbed wire or drowned in the Spree river.

But researchers at Berlin's Free University told Bild newspaper on Friday they have one more name to add to the list of those who died – Hans-Joachim Zock.

East Berlin police pulled his body from the water on December 17th 1970, but he never made the much-mourned list of those who died in attempting to cross, despite making it onto East German police records.

Zock apparently snuck into the grounds of a factory on the eastern bank of the river on November 14th 1970. Dressed in a grey coat, he threw himself into the freezing water, hoping to swim unnoticed to the other side.

His plan failed and he drowned. Over a month later GDR police found the young father's body.

In his top pocket he had a plastic bag containing a photo of his young son, a passport and a letter to his aunt who lives in the West.

“I cannot handle being here anymore…If you are reading this it could be that I am no longer alive,” the letter read.

Zock believed that as a born West German, he was being persecuted and forced to work much longer hours than his eastern peers.

The discovery was made by Free University historian Jan Kostka. “The documents confirm that Hans-Joachim Zock died trying to escape,” he told the Bild.