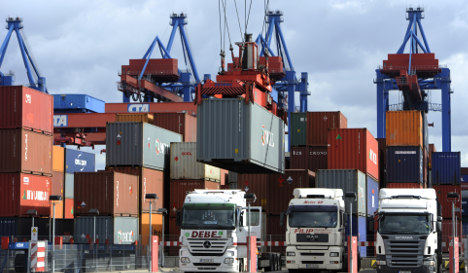 German gross domestic product (GDP) expanded by 0.3 percent in the period from July to September, slower than the 0.7 percent recorded in the previous three months, the federal statistics office Destatis said in a statement.

"The positive impulses in the third quarter came exclusively from within Germany," the statisticians explained.

"Private household and public spending were somewhat higher than in the preceding quarter. And investment in equipment and construction also increased
compared with the second quarter," the statement said.

Germany has come under heavy fire recently, from both its European partners and the United States for its strong trade surplus.

Both Brussels and Washington have suggested that Germany's strong economic performance is a result of its excessive dependence on exports at the expense of home-grown products in its crisis-battered EU neighbours.

The EU Commission in Brussels announced on Wednesday that it would scrutinize Germany's persistently high trade surplus to see if the country was doing enough to rebalance the eurozone economy as a whole.

But the German government and companies insist the country's competitive prowess is the fruit of deep and painful economic restructuring undertaken a number of years ago and other countries must go down the same path to get their own economies in order.

"Obviously, no one will seriously ask the Germans to export less or to close their factories for a long 'eurozone rebalancing vacation'," said ING DiBa economist Carsten Brzeski. "Neither will the Commission ask German companies to become less competitive."

The latest trade data suggested that Germany's high surplus stems from strong demand from outside the eurozone.

"With the rest of the eurozone, Germany's trade balance is already in balance," Brzeski said. "In our view, it is not about the exports as such but about what the Germans do with these surpluses. Investing it abroad has not been a successful strategy. Therefore, stimulating domestic investments could be the missing link, pleasing both the Germans and the European Commission," the expert argued.

Other analysts did not appear overly concerned by the noticeable slowdown in third-quarter growth.

"While the overall level of growth may be disappointing, the mix of components looks strong," said Berenberg Bank economist Christian Schulz. "Domestic demand remained the key growth driver, with machinery and construction investment stronger and public and private consumption rising," the analyst noted.

"The outlook for Germany remains strong, in particular for domestic demand," Schulz said.

Consumption was supported by a strong labour market, rising wages and low inflation.