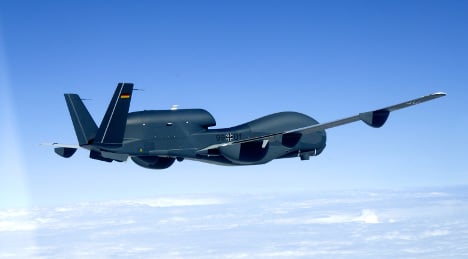 A scandal over Euro Hawk drones has damaged their reputation in Germany.

A draft version of the coalition agreement between the Conservatives and the Social Democrats seen by news site Spiegel states: "We categorically reject illegal killings by drones. Germany will support the use of unmanned weapons systems for the purposes of international disarmament and arms control."

It went on: "Before acquiring a qualitatively new arms system, we will thoroughly investigate all associated civil and constitutional guidelines and ethical questions."

According to political insiders, that effectively rules out buying drones during this legislative period which lasts for the next four years, Spiegel reported.

The move is a blow to outgoing defence minister Thomas de Mazière who was slated for spending hundreds of millions of euros on Euro Hawk drones which were never allowed to fly over German airspace.

He revealed in May that talks were underway with both the US manufacturer of Predator drones as well as their Israeli competitor, which produces Heron drones, to buy 16 in the next few years.

But the Social Democrats apparently signaled early on during the talks over forming Germany's next government that they were in favour of delaying a decision on purchasing drones.

According to Spiegel, the working group on foreign and security policy also agreed to set up a commission to work on coming up with proposals in response to a controversial Conservative proposal to no longer seek parliamentary approval for all deployments by the Bundeswehr carried out within an EU framework.