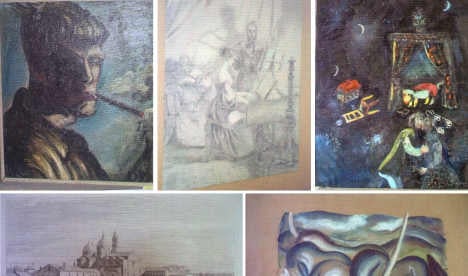 The trove includes work by Chagall and Dix. Photo: DPA

In the latest chapter of the Nazi art saga, Gurlitt, who hid around 1,400 works of art in his Munich flat after being left them by his art-dealer father, was seen leaving his apartment and taking a taxi to Munich airport.

He was, The New York Times claimed, with Özlem Gezer – an investigative journalist working for Der Spiegel.

Gurlitt, the son of Hildebrand Gurlitt – a powerful Nazi-era art dealer and collector who acquired the paintings in the 1930s and 1940s – shouted at photographers and said a few words to the waiting journalists before getting in the taxi.

In a short exchange with a reporter from the Süddeutsche Zeitung, the 80-year-old Gurlitt said: “I have given everything over to the prosecution”. He added: “I am on the way to Würzburg, to the doctor’s. But don’t worry, I’m coming back soon.”

When questioned on the origin of the art trove, he replied: “I can’t tell you anything, I know nothing.”

The snowy-haired Gurlitt was wearing a grey coat, carrying an umbrella in his right hand and pulling a suitcase behind him.

A reporter from the New York Times later tweeted a photo of the airport check-in machine, showing Gurlitt’s passenger details.

One of the pensioner’s neighbours also reported that Gurlitt had left a hand-written note on the door of his apartment asking visitors to leave him in peace because he was having heart problems.

On the note he also confirmed that he would soon give a written statement on his involvement in the controversy.

Meanwhile, Jewish leaders on Tuesday welcomed Germany's decision to launch a task force on the Nazi-looted art and lift the veil on the vast art trove.

The American Jewish Committee said the moves, including posting images online of 25 long-lost works by the likes of Matisse, Delacroix and Rodin believed to have been stolen by the Nazis, marked key first steps towards finding their rightful owners.

"It sends an important message that the federal government, after the outrage about the silence surrounding the stolen Nazi art, got involved," said Deidre Berger, director of its Berlin office. Now the necessary resources must be made available so the experts can start their work."

After a week of uproar over the revelation that German customs police had seized the treasured works more than a year-and-a-half ago, the government took a few steps toward transparency.

Public prosecutors in the southern city of Augsburg had been in charge of the investigation against Gurlitt. They had commissioned a sole art historian to catalogue the works, and insisted on discretion for their ongoing probe into charges of tax evasion and misappropriation of assets.

But when the case was blown open in a magazine report earlier this month, Jewish families who believe the haul may include paintings stolen or extorted from them under the Third Reich and museums whose holdings were raided demanded to see a full inventory in order to make possible claims.

Amid angry accusations of foot-dragging and obfuscation, the German government said on Monday it and the state of Bavaria where Munich and Augsburg are located had assumed responsibility for the research and commissioned a task force of at least six experts to speed up the process.

It posted images on its official online database www.lostart.de with a first batch of 25 paintings "for which there is strong suspicion that they were seized as part of Nazi persecution".

The website, which crashed repeatedly on Tuesday apparently due to massive demand, is to be updated "regularly".

The works shown included an undated dream-like allegorical scene by Chagall, a Delacroix sketch, the iconic 1901 work "Two Riders on the Beach" by Max Liebermann, a sumptuous portrait of a seated woman by Henri Matisse from the mid-1920s, and an undated nude drawing by Auguste Rodin. The German government said investigators now believe that of the hundreds of works found professionally stored in Gurlitt's trash-strewn flat, around 590 may have been stolen from Jewish owners or bought from them under duress.

About 380 works are believed to have been seized from museums amid a crackdown under Adolf Hitler on avant-garde, or so-called "degenerate" art.

Authorities had already shown slides of priceless gems in the collection including unknown Chagall and Otto Dix canvases to reporters at a news conference on November 5th.

Foreign Minister Guido Westerwelle said Germany's hard-won international reputation for facing up to its Nazi past was on the line with the extraordinary discovery of the paintings.

"We have to make sure that we don't fritter away the trust built up over long decades. It's the time for transparency now," he said on a visit to India.

Chancellor Angela Merkel's spokesman Steffen Seibert told reporters on Monday that Berlin "can well understand why representatives of Jewish groups in particular are asking questions – they represent elderly people who were grievously wronged, or their families".

However the legal landscape is murky and Cornelius Gurlitt may still be able to demand the state return much of his collection.

German media and Jewish organisations called on Berlin on Tuesday to override any claim by Gurlitt by invoking the Washington Conference Principles of 1998 covering art taken from Jews under the Nazis, which commits public institutions and large museums to do their utmost to return work to their rightful owners or their heirs.