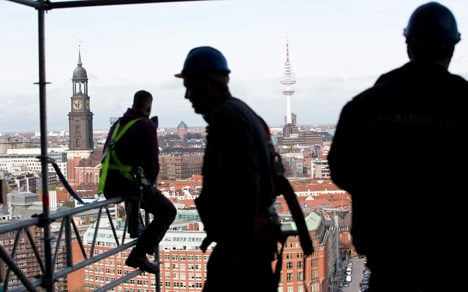 In their annual report presented to Chancellor Angela Merkel, the German Council of Economic Experts, or so-called "Five Wise Men", warned that Europe's biggest economy must not rest on its laurels.

Their report comes against a background of some criticism from abroad that Germany is too successful in building up a huge trade surplus and should do more to stimulate consumption at home and so draw in imports, notably from the rest of Europe.

"The present economic situation and Germany's healthy position compared to the euro area's crisis countries seem to have obstructed many politicians' view of the major future challenges," the report said.

Following the general election on September 22nd, Merkel's conservative CDU and CSU parties have been holding talks on a possible "grand coalition" with the Social Democrat SPD.

Among a range of different measures under discussion are possible exemptions to the new retirement age of 67, minimum wages and tax increases.

"Future challenges will be far more difficult to overcome if the Agenda 2010 reforms become diluted or reversed in some cases," the experts warned.

"The same holds for measures which hurt growth and job creation, such as minimum wages and tax increases."

In the eurozone's long and debilitating crisis, Germany has fared much better than its European neighbours thanks to deep and painful structural measures, known as Agenda 2010, initiated by the previous SPD administration.

Merkel has consistently argued that other countries should follow Germany's example and get their economies in order.

But the panel believed that Germany is still facing considerable challenges of its own.

"The German government should not give the impression that it expects – or even demands — painful adjustment processes from other countries, but shies away from unpopular measures for Germany," the report said.

Turning to the economic outlook, the panel said that global growth was expected to accelerate from 2.2 percent this year to 3.0 percent next year.

The eurozone as a whole would see its economic contract by 0.4 percent in 2013, owing to "the year's weak start." But it would expand by 1.1 percent next year.

"The upturn now evident is buoyed by the very expansionary monetary policy in many countries, but is not yet able to sustain itself given the high levels of debt remaining," the report said.

"Against this backdrop, the economic situation in Germany is likely to brighten in 2014; gross domestic product growth will be just 0.4 percent in 2013, but 1.6 percent in 2014," it predicted.

The European Commission on Wednesday also placed Germany under scrutiny for its international trade surplus, seen as an obstacle to recovery across the rest Europe.

"The issue is whether Germany … could do more to help rebalance the European economy," Commission President Jose Manuel Barroso said after placing 15 other countries under scrutiny for failing to meet EU economic targets.

Between now and May, the Commission using new powers is to scrutinize theeconomic programmes of the 16 countries to ensure that they are in line with overall coherent economic management of the eurozone and European Union economies.

The head of the EU executive said the focus also had to include countries with surpluses considered excessive, after years of concentrated efforts to organize bailouts and drive down public deficits.

"This is not about the EU running economies in place of national governments," Barroso said. It is about "ensuring that what is good for individual states is good also for the EU," he stressed, opening a new phase of what he called "bolder" cross-border economic policy-making.

"Let's be clear on this, we are not criticizing Germany's … success in global markets," added EU Economic Affairs and Euro Commissioner Olli Rehn.

He said data had shown that "Germans are constantly investing a large partof their savings abroad," and asked "whether this is deficient even from a German perspective."