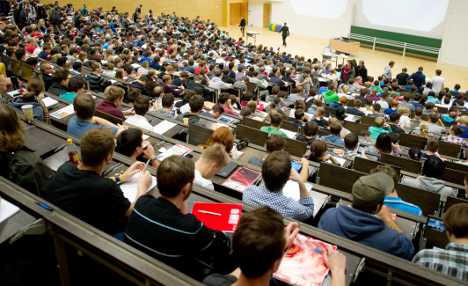 Every student and member of the staff at the university was told they had been unenrolled. Photo: DPA

The e-mail, which was sent from the Dresden University of Technology, read: "Your logins will be locked in twelve days. This is happening because you have been unenrolled as a student, your contract is up or your guest logins are no longer valid. Please ensure you have saved any information that may be contained within these logins."

Many distressed students hastily replied to the e-mail with their matriculation certificates attached, while others questioned whether they had paid their fees on time or passed their last set of exams.

But as students took to social networking sites they realized that they had all been unenrolled and it emerged that the e-mail must have been sent by mistake.

"The dean must be hoping for shorter queues and caviar in the canteen," one user quipped online. "With this brave and well thought-out move we want to try to make Dresden an even more elite institution," another student wrote. A third called for free beer in compensation.

The university's Wikipedia page was swiftly altered to list the number of students as zero.

It later apologized for the e-mail and confirmed it had been sent to some 48,000 people.

Kim-Astrid Magister, spokeswoman for the university, said human error while managing a software programme which collates staff and student data was responsible.

Though the error took place on Friday, it wasn't until staff returned to work on Monday that the problem could be dealt with. The dean had "presumably also been affected," Magister told Spiegel Online. The university stressed however that the error had now been rectified.