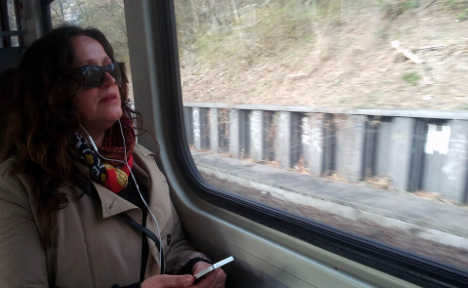 Users can explore the history of forced labour in Berlin on foot, bicycle or train with the app. Photo: Berliner Geschichtswerkstatt

The "Testimony App," which is available in both English and German, was created by three historians who have been carrying out research into forced labour. "We were really interested in oral history and an app is the perfect medium for it," Irmer told The Local.

It includes five tours of the city and features stops at the Brandenburg Gate, the Academy of Arts and the Hotel Adlon. "These were the sites where authorities organized the large-scale system of forced labour," Irmer said.

The tour also guides users through the industrial area of Wedding – today one of Berlin's poorest areas – where many labourers were sent to work in factories.

"The majority of forced labourers worked in factories," said Irmer. "But there were also many people who worked on farms and even in private households."

The historians were particularly interested in bringing the individual stories of forced labourers – who by 1944 made up nearly a fifth of the German workforce – to life.

"Apps allow history to be localized," Irmer said. "This way you can stand at the Brandenburg Gate or at the Adlon Hotel and find out what went on there … it makes the experience much more exciting."

The app features more than thirty stories told by survivors – three of whom were interviewed specifically for the project, while the rest come from existing digital archives.

Should the project prove successful, Irmer would like to develop apps focused on areas outside of Berlin too. "We're using this as a model," he said. "If we get funding, we would love to expand."

The app can be downloaded for free here.