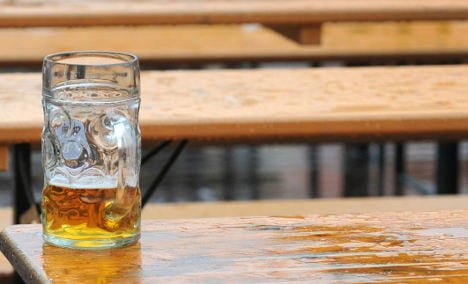 Josef Hecken is chairman of the Federal Joint Committee (GBA), the body which decides what treatments are offered by the statutory health system.

Generally GBA meetings are dry, specialist affairs, where representatives from doctors' associations, statutory health insurers and hospitals discuss what treatments are effective for patients and value for money.

But eyebrows were raised when Hecken recently declared that not "every second" person needed psychotherapy – and that a beer would sometimes do the job. The Tagesspiegel newspaper reported that the comment was recorded in official notes of the meeting.

Hecken made the remark during a debate over calls for more psychotherapists to be included in statutory healthcare provision.

And although he later said his comments were "unfortunate" – this was only because they could be misunderstood.

It was not his intention to "make light of psychiatric illness, or to describe the use of alcohol as an effective alternative to psychotherapeutic treatment.

But he said he wanted to say that, "personally I do not see every disorder such as for example having occasional problems getting to sleep, as pathological condition in need of immediate treatment – rather I think that sometimes the old home cure of a bottle of warm beer can help."

He said it was clear to him that people in Germany often have to wait for months for therapy for conditions far more serious than having trouble getting to sleep.

Yet his comments have upset those in the psychiatric professions, the Tagesspiegel reported.

A letter of protest is being circulated among practicing psychotherapists, the paper said, which says, "You make light, and ignore the needs of our patients with your bottle of beer metaphor, and subtly stigmatize people with severe psychiatric disorders."

Chairman of the German association of psychotherapists, Dieter Best, said Hecken's beer suggestion was a serious faux pas, particularly in light of the link between depression and alcohol dependency.

What was even worse, Best told the Tagesspiegel, was Hecken's comment that it had been a "cardinal error" to allow access to psychotherapy without a doctor's prescription. Before this change, made back in 1999, many people with psychiatric illnesses had not received the necessary therapy, but had been simply tranquilized by their doctors, said Best.