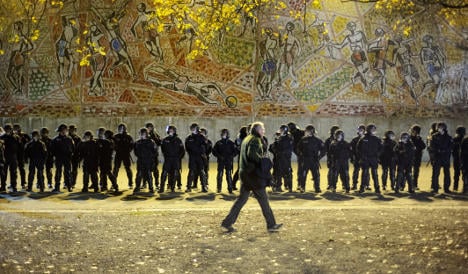 Just 70 kilometres separate the two north German clubs and tensions ran high for the first Lower Saxony derby in the Bundesliga since April 1976, with promoted Braunschweig coming into the game bottom the league.

Police used water cannons, batons and pepper spray on fans outside the stadium before kick-off in a bid to keep rival fans apart.

"Police officers had to deal with a significant potential for violence from both sides before the game," said police spokesman Guido Cyrson.

"Due to consistent intervention, we were successfully able to keep the fans apart and officers prevented things getting worse."

Around 850 hooligans, categorised "violent" or "violence-seeking", had been identified in advance of the game by police intelligence.

Violent football supporters from as far afield as Hamburg, Bielefeld, Kassel, Berlin and even Vienna were identified at the game, mixing with both sets of supporters.

During the 90 minutes of the match, both sets of fans set off, one of which burnt on the pitch.

"By doing this, they (the fans) have damaged themselves," fumed Hanover president Martin Kind.

"It's shameful and it's a level (of behaviour) that we cannot accept. The question has to be asked how so many pyrotechnics could be brought into the stadium. It is something we have to discuss. It can't go on like this."

The German Football Federation (DFB) are set to investigate.

A controversial set of security regulations, brought in last season by the German Football League (DFL), gives clubs the power to search fans suspected of carrying flares into the stadium.

Despite increased security, incidents of flares being set off at Bundesliga games remain commonplace.