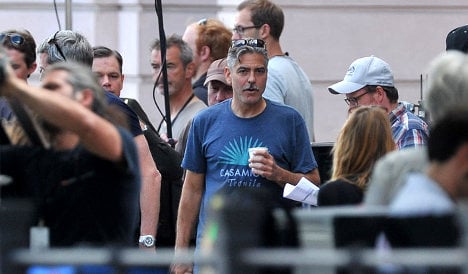 Clooney is due on the red carpet of the 64th annual event running February 6th-16th to show his new movie, based on the true story of a US platoon charged with rescuing priceless artworks from the Nazis during World War II.

The announcement dovetails with revelations this week that an elderly recluse in the southern German city of Munich hid a stash of more than 1,400 artworks believed stolen by the Nazis in his garbage-strewn flat for decades.

The paintings, sketches and prints include priceless works by Picasso, Matisse and Chagall thought lost forever that may have been taken from Jewish collectors, extracted from them under duress for a pittance or seized from museums as part of a Nazi crackdown on modernist "degenerate" art.

"Over five million cultural assets stolen by the Nazis were returned to their countries of origin in the years following World War II," festival director Dieter Kosslick said in a statement.

"As the recent discovery in Munich demonstrates, the art theft of that time is as current as ever. 'The Monuments Men' finally gives this little-known subject a worldwide audience."

The unit portrayed in the film, comprised of seven museum directors, curators, and art historians, was tasked by the Allies with recovering masterpieces behind enemy lines and returning them to their rightful owners.

Clooney directed and co-wrote the film and assembled a cast including Matt Damon, Bill Murray, Cate Blanchett and John Goodman. It was filmed in Germany and is due to come out in the United States on February 7th.

Organisers of the festival known as the Berlinale announced Tuesday that an all-star romp by US director Wes Anderson, "The Grand Budapest Hotel", would open the event on February 6th.