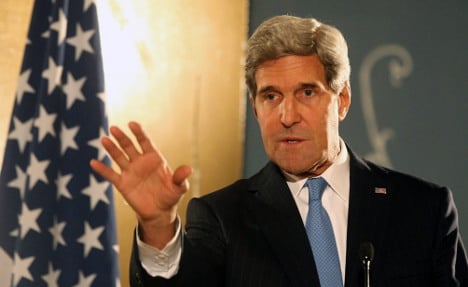 The German government is studying the possibility of questioning US fugitive leaker Edward Snowden in Russia after admitting he could be in danger of extradition if he were to come to Germany.

The former US National Security Agency (NSA) contractor is behind revelations of US spying in Germany and other countries, including the tapping of Chancellor Angela Merkel's phone.

He is wanted in the US on espionage charges following his disclosure of classified documents that have sparked international uproar.

"Without question this situation has led to tensions in our relationship with Germany and the Germans, who are so cordial to us Americans and to me personally," Kerry told the Bild newspaper.

"But our relationship is strong and it will also remain strong," he added in the interview published in German.

"In difficult moments, friends work together with openness and mutual respect and Germany is one of the strongest friends of the United States and one of our most important allies," Kerry added.

Merkel was always a "great partner" to US President Barack Obama and the US, he said, adding that issues such as Syria, Iran and a US-EU free trade accord "are simply too important not to advance together".

"So we will master this situation together," he continued.

Asked what needed to be done to repair US-German ties, Kerry said that Washington was talking with its German partners "about how we better coordinate our secret service efforts and, in doing so, can be considerate of the German concerns".

Kerry, who as the son of a diplomat spent part of his childhood in Berlin, visited Germany in February and told Thursday's Bild he looked forward to coming back as soon as possible.

On Wednesday, German government spokesman Steffen Seibert stressed to reporters that, for Germany, the transatlantic alliance was of "extremely high value" in security and foreign policy terms.

READ MORE: Germans: US could snatch Snowden from us