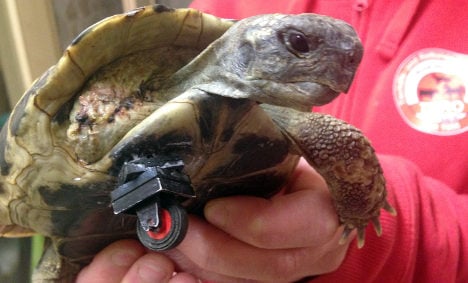 "First we fitted a double wheel but it was difficult for him to turn corners so we replaced it with a single wheel and that is much better for him," Dr Panagiotis Azmanis told The Local.

He works at the Birdconsulting International veterinary practice of Marcellus Bürkle in Achern in Baden, and ended up raiding the toy box of the practice manager's daughter for wheels and spacer blocks.

Initially though the focus was on saving the tortoise's life. "He was in pretty bad shape when they brought him to us. The lower part of his front leg was missing, and the upper part was very bad, with bone showing, and maggots in necrotic flesh."

One the animal had been stabilized, the vets amputated the injured leg at the shoulder and treated him with antibiotics and fluids, as well as giving him pain killers.

Then came the question of lifting his fourth corner so he could move around.

"Tortoises need to run free in gardens, so he needed a prosthetic," said Azmanis.

He used special veterinary surgical glue to stick a base block to the underside of Schildi. The corners of the base block were glued with normal superglue.

"After that we could add blocks to achieve the correct height," he said.

And now the single wheel has proven to be successful, Schildi has been taken back to the animal shelter.

"We will see him again once in a while for check-ups," Azmanis said.

"If he gets a 'flat tyre' it will be a simple matter to replace the wheel. They move around quite a lot so I'd expect to see him for a new wheel about once a year."