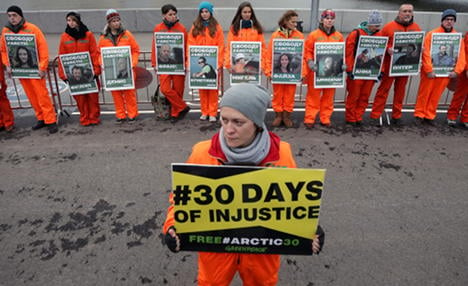 Ahead of the hearing, around a dozen Greenpeace activists rallied in front of the German-based International Tribunal for the Law of the Sea, based in the northern port city of Hamburg.

Kumi Naidoo, executive director of Greenpeace International, said there were "enough grounds for an immediate release" of the 30 detained environmentalists who face prison terms in Russia on hooliganism charges.

"Fifty days in prison for trying to hang a banner that says 'stop the destruction of our planet' is already a long time," he said.

Russia's angry response after two Greenpeace activists scaled a state-owned Gazprom oil platform to protest at Russian energy exploration in the Arctic in mid-September has sparked an international outcry.

Russian coastguards boarded the Dutch-flagged Arctic Sunrise icebreaker on September 19th, arresting the 30 crew members, who included activists from 18 countries and two journalists, and charged them with piracy.

German Chancellor Angela Merkel has voiced concern to Russian President Vladimir Putin over the detentions and French Prime Minister Jean-Marc Ayrault has also called for the release the French national among the crew.

In Britain, Canada and Argentina, relatives and supporters of the activists including British actor Jude Law have also protested.

The crew members have been placed in pre-trial detention until November 24th and several have complained about their conditions, including being kept in isolation, cold cells and lack of suitable clothing and food.

Russian investigators last month reduced the piracy charge, which carries a maximum 15-year prison term, to hooliganism – the same charge used against the Pussy Riot punk band for a protest performance against Putin.

The Pussy Riot action in a Moscow cathedral in February 2012 landed two band members in prison for two years.

Russian Prime Minister Dmitry Medvedev said after talks last week with his French counterpart that Russia would not condone attempts to "influence technically complicated and unsafe processes" associated with the extraction of natural resources.

Objects such as oil platforms are essentially "like a powder keg", he said.

During the protest in the Barents Sea, Greenpeace hitched two activists to the side of the rig. The pair tried to scale the platform but eventually slipped into the freezing water and were recovered by the Russian coastguard.

Russian security services seized control of the activists' vessel the next day by descending on to the deck from helicopters in a commando-style raid.

Despite Russia's boycott, the hearing can go ahead regardless, as both parties to a dispute are not required to appear or defend their case under the tribunal's rules.

The court was established by the United Nations in order to help settle maritime disputes between states.