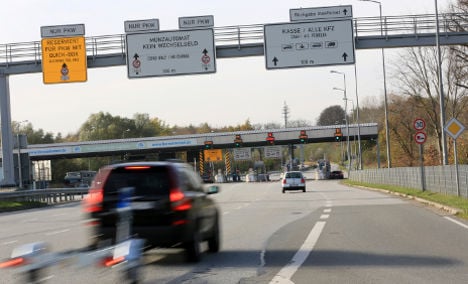 Who's watching you? Photo: DPA

The information would grant authorities an extensive profile of millions of travellers' movements on the country's motorway network, said Spiegel magazine which reported idea.

Until now the data from Toll Collect, which operates the toll system, can only be used for the collection of payments from truck companies using the roads.

But Friedrich, from the Bavarian wing of Chancellor Angela Merkel's conservative bloc, has complained about the current strict ban on this information being passed to officials.

A 30-page paper being introduced to continuing coalition negotiations with the Social Democrats over forming a government, argues for the lifting of this limitation.

The ban on information being shared means, "the security authorities have no access for the investigation of crimes or for the prevention of danger to life and limb" the Spiegel quotes the paper.

Friedrich's interior ministry confirmed that this was part of the conservative bloc's demands of the Social Democrats.

"It is important for the security authorities to be able to effectively chase criminals," a spokesman told the magazine.

Millions of vehicles pass through the 5,400 sections of autobahns which are subject to tolls and accompanying checks.