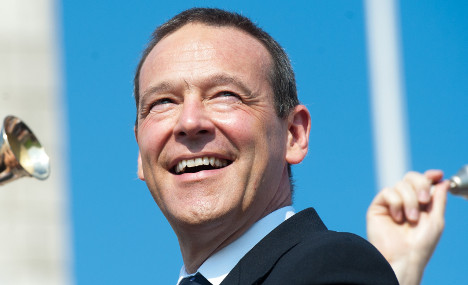 "A meeting has taken place at the German foreign ministry," the embassy spokesman told The Local. "The British ambassador was there."

He would not comment on how long the meeting had taken, nor on whether there had been any shouting.

The Germans also confirmed the summoning of ambassador Simon McDonald.

"The British ambassador was asked to a conversation at the foreign ministry, on the instructions of Foreign Minister Guido Westerwelle," a spokesman said in a statement.

"The head of the European Division asked for a statement on the recent reports in British media, and reminded him that the surveillance of communications from a diplomatic mission would be in contravention of international law."

The Independent reported on Tuesday: "The NSA documents, with aerial photographs and information about past spying activities in Germany, suggest that Britain is operating its own covert listening station within a stone's throw of the Bundestag, Germany's parliament, and Ms Merkel's offices in the Chancellery, using hi-tech equipment house on the embassy roof."

It said aerial photos showed what it called a potential eavesdropping base "enclosed inside a white, cylindrical tent-like structure" which could not be seen from street level. It had been there since the embassy was opened in 2000.

The structure was similar to the now-derelict Teufelsberg listening post operated by the allies in West Berlin during the Cold War.

"Equipment within the embassy unit would be capable of intercepting mobile phone calls, wi-fi data and long-distance communications across the German capital, including the adjacent government buildings such as the Reichstag and the Chancellery clustered around the Brandenburg Gate," the paper said.