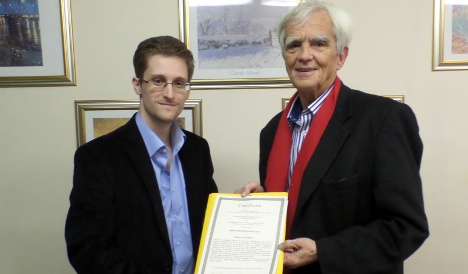 "He has temporary refugee status. That status does not foresee any restrictions on his moving around the country or speaking to anyone," President Vladimir Putin's spokesman Dmitry Peskov told AFP.

The former National Security Agency contractor spent more than a month in the transit zone of a Moscow airport before receiving temporary asylum in Russia in August to the fury of the United States where he faces trial on charges under the Espionage Act.

Putin has said Snowden was welcome to stay in Russia as long as he did not harm US interests.

Peskov said on Saturday that condition remained in place. "No one will allow him to use the territory of Russia to harm US interests."

But the spokesman also said that Snowden was free to speak to German prosecutors over their probe into claims that Washington spied on Chancellor Angela Merkel, or even travel to Germany.

"No one is keeping him here. He is not being held captive here," said Peskov. "He is free to pack up and fly anywhere he wants."

But he warned that if Snowden wanted to return to Moscow, he would have to re-apply for asylum.

"He can leave only once," said Peskov.

Ströbele told reporters in Berlin on Friday that Snowden was willing to speak to the German authorities.