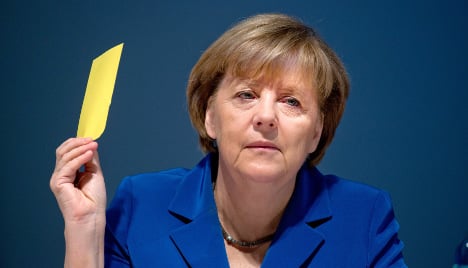 In her weekly podcast, Merkel described the events of November 9, 1938 — also known as 'The Night of Broken Glass' — as "one of the darkest moments in German history."

She called on "all the people in this country to show their civil courage and ensure that no form of anti-Semitism is tolerated."

Merkel added it was "almost inexplicable but also the reality that no Jewish institution can be left without police protection."

Nevertheless, she noted there was now a thriving Jewish community in Germany, with an influx from the former Soviet Union.

On November 9th, 1938, Nazi thugs plundered Jewish businesses throughout Germany, torched some 300 synagogues and rounded up about 30,000 Jewish men for deportation to concentration camps.

Today, there are some 200,000 Jews, according to the Central Council of Jews in Germany.

November 9 is a particularly noteworthy date in German history, as it was on this day in 1989 that the Berlin Wall fell.