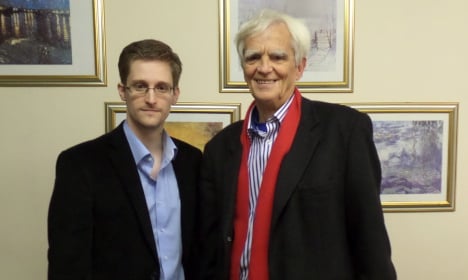 Green Party MP Christian Ströbele, 74, delivered the letter in a press conference on Friday afternoon following his surprise meeting in Moscowwith Snowden and two journalists on Thursday. The fugitive had handed the German lawmaker a letter addressed to the German government, the Bundestag lower house of parliament and the Federal Public Prosecutor, Ströbele's office said.

"He proved that he knows many things. He is willing in principle to help shed light" on the spying, said Ströbele.

In the letter addressed “to whom it may concern," the whistleblower said he hoped after the “difficulties of this humanitarian situation have been resolved,” he would be free to “cooperate in the responsible finding of fact… in regard to the truth and authenticity of documents.”

While not specifically mentioning Germany or Merkel, Snowden said he looked “forward to speaking with you in your country when the situation is resolved” and expressed thanks for “your efforts in upholding the international laws that protect us all.”

Despite the vague and distant tone of the letter, the German government appeared to have accepted it as a genuine overture. If Snowden wanted to deliver information to Germany, said German Interior Minister Hans-Peter Friedrich on Friday, “then we’d be happy to accept it.”

“We’d be grateful when something comes [from him], whether it’s via Mr Ströbele, letters or something else,” added Friedrich.

Snowden’s lawyer Anatoly Kucherena told Moscow-based broadcaster Echo Moskwy on Friday that any conversation or exchange of information between Germany and his client would have to take place on Russian soil, where he had been granted temporary asylum.

He could however “give testimony in Russia within the framework of international agreements,” if Germany wished, said the Kremlin-friendly lawyer.

The most recent revelations from intelligence leaked by Snowden came in a Washington Post report alleging that NSA technicians had tapped into Yahoo and Google data centres around the world, winning access to vast amounts of private data.

Wanted for espionage by Washington, Snowden has been living in hiding and keeping off the radar in Moscow with what his lawyer called "small alterations in his appearance."

The US ambassador to Berlin said on Thursday that he was unaware of any illegal activity linked to US espionage operations.  John Emerson was asked by German public broadcaster ZDF about reports that the National Security Agency conducted mass surveillance of German communications including tapping Chancellor Angela Merkel's phone over several years.

"As far as I am aware there is nothing we're doing that is a violation of law," he said, without specifying whether he meant US or German law.

Merkel angrily confronted US President Barack Obama last week with allegations that the NSA was snooping on her phone, saying it would amount to a "breach of trust".

The German government summoned Emerson, a lawyer by training who only arrived in Berlin as ambassador in August, for a highly rare dressing down between the close allies.