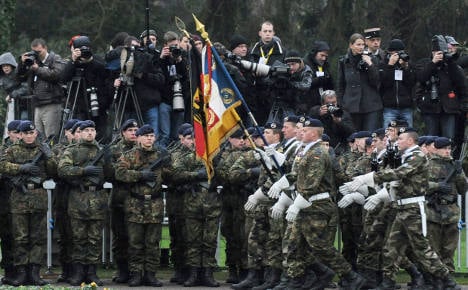 The brigade was set up in 1989 by then French president Francois Mitterrand and German chancellor Helmut Kohl to increase military cooperation between the two former World War Two foes.

The French defence ministry said in a statement that it would be shutting down the 110th Infantry Regiment based in the southwestern German town of Donaueschingen in 2014.

The regiment groups together 850 soldiers and 150 civilians, and the ministry said the decision was part of "difficult choices" needed as France
cuts its military budget to reduce its state deficit.

But it reaffirmed "France's full commitment" to the brigade, which will be left with around 4,000 soldiers based in both countries after the regiment closure.

German Defence Minister Thomas de Maiziere expressed "regret" at the decision, saying in a statement that the regiment  "contributed with success
for many years to Franco-German friendship".

After the dissolution, France will still have 500 troops in Germany, about the same number of German troops that are stationed in France.

The rest of the brigade is made up of French soldiers based in France and German military based in Germany.

The brigade is highly symbolic in nature as it is difficult for both countries to jointly deploy soldiers to hotspots, given the different rules of engagement that govern both armies.

Soldiers from the brigade have nevertheless been sent to Afghanistan and Kosovo in the past.