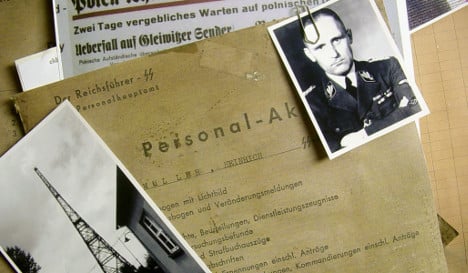 Photo DPA: Heinrich Müller was head of the Nazi secret police, the Gestapo.

Known as one of the most murderous Nazi officials, the death of the Gestapo head had long been shrouded in mystery. He was last sighted in May 1945 in Hitler's bunker and investigations into his death continued decades after the war.

The discovery that his body lies in a Jewish Cemetery in central Berlin was made by head of the German Resistance Memorial Centre, Johannes Tuchel, after finding documents hidden away in city archives. Sharing the cemetery is world famous writer and philosopher Moses Mendelssohn

“His corpse was buried in a mass grave in the Jewish cemetery in Berlin Mitte,” Tuchel told the Bild newspaper on Thursday.

Dieter Graumann, head of the central council for Jews in Germany told the paper that “one of the most brutal Nazi sadists being buried in a Jewish cemetery is a tasteless monstrosity.” He added that the “memory of victims was being heavily trampled on.”

In 1963, papers emerged claiming that Gestapo boss Müller was buried in the Neukölln district of Berlin, but these were found to be fake.

“Müller's death was registered by the Mitte registry office, with the place of burial being listed as the Jewish cemetery,” Tuchel told Bild.

Yet somehow these papers got lost, and rumours circulated for years about where Müller was. He was said to be working as the righthand man to the Stasi chief in East Germany in 1951. This was backed up by an official statement from Bundeswehr's news service.

Gravedigger Walter Lüders told police in 1963 that he had buried Müller personally and that he had seen Müller's face. While his statement was never confirmed at the time and he was dismissed, it turns out now that he was telling the truth.

He told Bild newspaper 50 years ago that there were three mass graves in the Jewish cemetery, and that Müller was in one of them.

Müller attended the Wannsee Conference at a villa on the outskirts of Berlin in January 1942 at which senior Nazis plotted the "Final Solution", a plan to exterminate all Jews in Nazi-occupied Europe.