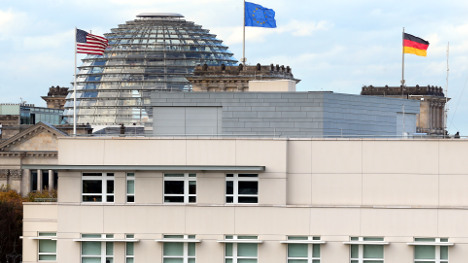 Photo: DPA. The US embassy in Berlin has been accused of harbouring a spy station.

Stern said that the companies worked hand-in-hand with US intelligence,providing services and security and maintaining IT networks.

It said a core group of around 30 firms conduct spying operations themselves for the Central Intelligence Agency (CIA) and the National Security Agency (NSA) as well as US military intelligence.

"They help to coordinate agents' operations, analyze intercepted communications and train soldiers in espionage techniques," Stern said. "They are also believed to be involved in planning deadly drone operations in Africa (at the US military's African command centre AFRICOM) from Stuttgart."

It said the largest of these firms was Booz Allen Hamilton, which had employed now fugitive intelligence contractor Edward Snowden, the source of extensive leaks on the activities of the NSA.

Stern said it based its report on classified advertisements for employment,public profiles of the US firms' staff members and contracts between US government agencies and the companies to which it had gained access.

Reports that the NSA has conducted mass spying operations on German soil,including allegedly tapping the mobile phone of Chancellor Angela Merkel, have sparked a crisis in transatlantic ties.

Merkel dispatched a delegation of intelligence chiefs and political advisors to Washington for high-level talks Wednesday on drafting a no-spy agreement.