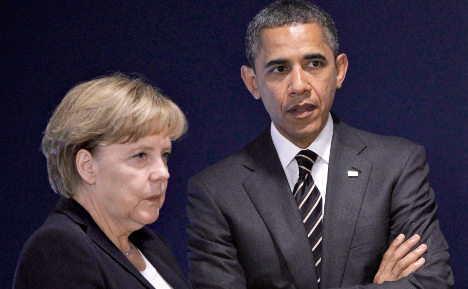 In its most comprehensive response yet to the allegations, albeit using heavily nuanced language, the White House said that the fact it had the technical expertise to carry out certain espionage missions, did not mean that it should.

"With new capabilities, we recognize that there needs to be additional constraints on how we gather and use intelligence," White House spokesman Jay Carney said.

Earlier, President Barack Obama's national security advisor Susan Ricewrote on Twitter that Washington was seeking a "proper balance between security concerns of our citizens and allies and the privacy concerns that all people share."

The comments followed a Wall Street Journal article which quoted unnamed senior officials as saying that Obama did not know US spies were bugging Merkel's phone and that when he found out, he ordered it stopped.

The more conciliatory language also came as the Obama administration prepares to meet two teams sent from Europe to discuss the diplomatic fallout from the claims, one from the European parliament, another including senior German government and intelligence agency officials.

The White House stuck to its refusal to discuss the case of Merkel and other alleged operations specifically, but did speak in a way that may be designed to appease allies over National Security Agency (NSA) activities.

Carney said that internal reviews into US intelligence gathering would ensure surveillance programs include proper "accounting for both the security of our citizens and our allies and the privacy concerns shared by Americans and citizens around the world.

"We also need to ensure that our intelligence resources are most effectively supporting our foreign policy and national security objectives, that we are more effectively weighing the risks and rewards of our activities," Carney said.

In the fog of unspecific language and hints that characterize the way officials talk about intelligence matters, it was not clear whether Carney was hinting at a curtailing of certain spying operations.

While stressing that US spies must focus "above all" on threats to the American people, his words did however seem calculated to offer some recognition to US allies who believe US espionage activities overstepped the mark.

"We need to ensure that we are collecting information not just because we can, but because we should, because we need it for our security," Carney said.

The careful White House repositioning came after days of outrage in Europe over reports apparently based on disclosures by fugitive US security analyst Edward Snowden and evasive statements from the top American officials.

Carney, however, refused to comment on the Wall Street Journal article which said the NSA ended a program to spy on Merkel and other world leaders after an internal review revealed it to White House officials.

The review alerted officials to the monitoring of 35 world leaders, the paper said quoting an unnamed senior official.

Merkel protested about claims the NSA had intercepted her Nokia mobile phone messages in a telephone call to Obama last week.

US claims that it is not and will not tap her phone left open the possibility that American spies had done so in the past.

Carney also said on Monday that any information gleaned by US intelligence agencies was used purely for national security reasons and not to get a commercial or economic leg-up on America's competitors.

Some observers have wondered whether the US government, seeing Merkel as the key figure in charting Europe's response to the Euro crisis, has been keen to access intelligence on the German government's inner deliberations on economic matters.