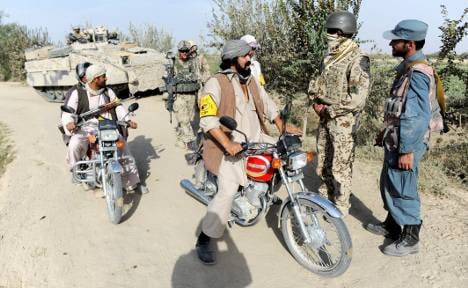 Prior to this, the government had previously only granted locals who assist the German army sanctuary in exceptional cases, state broadcaster ARD reported.

The government's decision to allow interpreters to travel to Germany came as a result of growing evidence they were under constant threat from Taliban recriminations for helping German soldiers during their time in the Kundus region.

Some had received death threats by letter, others threatening phone calls which have since been traced to known Taliban strongholds. The Tagesschau programme said that some workers were forced to change addresses daily and did not feel safe to go to university.

Pressure has been growing on the German military to do more to help their linguist colleagues, both from attention in the media and disapproval within the ranks. Soldiers had complained the screening process to leave the country was taking too long.

Both Germany and the UK are also offering financial incentives to former cooperators in return for staying in Afghanistan, in a bid to avoid an influx of the endangered interpreters. German troops have now withdrawn from the Kundus region, leaving it under the control of the Afghan National Army and Afghan police.

The UK government agreed to grant five-year visas to six hundred Afghan interpreters in May, under pressure from a media campaign in support of the interpreters, reported The Times newspaper.

Mohammad Rafi Hottak, who had worked as an interpreter for UK forces, told The Times: "It will send a message to the Taliban and the terrorists that the Afghan interpreters are not left alone to be persecuted."