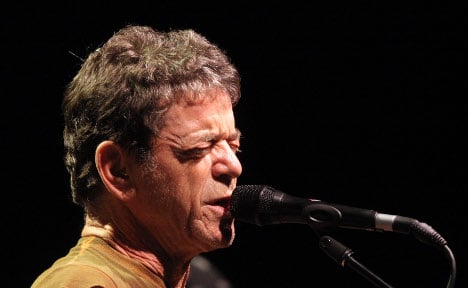 The singer and guitarist, who died after failing to recover from a liver transplant earlier this year, was known for his dark, poetic lyrics and distinctive deadpan delivery.

The New York singer launched his career with his band Velvet Underground in the late 1960s. The band, managed by artist Andy Warhol, was not initially a commercial success but gained recognition later after picking up a dedicated cult following.

After leaving the band in 1970, Reed found international fame two years later with hits Walk on the Wild Side and Perfect Day from his second solo album Transformer.

Fewer people will be familiar with Reed's follow-up 1973 concept album Berlin, which tells the story of Jim and Caroline, a doomed pair struggling with drug addiction in the then-divided German capital.

The album, slammed at the time by fans and critics as depressing, depicts the city as a vice pit of prostitution, drugs, domestic violence, mental illness and suicide.

Ironically, Reed had never set foot in West Berlin at the time of writing – first visiting after David Bowie moved there in 1975, according to Welt newspaper.

Later he spent a short time living in a shared flat in the Schöneberg district with musicians Bowie and Iggy Pop, where he is said to have indulged in a wide range of drugs, including heroin.

After leaving to return to New York, Reed often came back to tour in Germany over the decades, regularly visiting Cologne, Hamburg, Munich and Düsseldorf. He was said to have been pleased at the way Berlin had developed after the fall of the Wall.

CLICK HERE for photos of Lou Reed in Germany

"The people here seem to be happier now," said Reed on returning to the city in 2007 for the first live performance of his long-forgotten album Berlin, which was then rediscovered as a dark masterpiece.

Reed also took inspiration from Germany for his last studio recording – a collaboration with metal band Metallica. The concept album Lulu is based on works by German playwright Frank Wedekind and includes a particularly gory song called Brandenburg Gate.