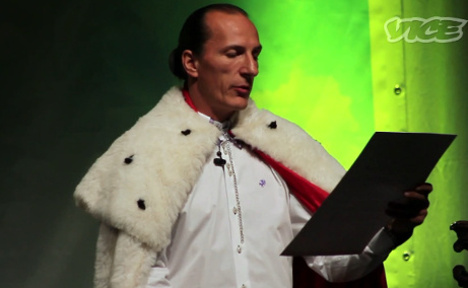 In July 2009, Peter Fitzek, the self-proclaimed ‘King of New Germany’, set up a nine-hectare “kingdom” in Wittenburg, Brandenburg. He created his own currency, passports and driving licence, but last Thursday was sent to prison for three months for driving without a German licence.

Fitzek is undoubtedly an extraordinary character. Once married with two children, he met a mysterious person who gave him "ancient magical writings", he recalled in a documentary by cult news site, Vice. From this point on he rejected traditional scientific logic and embraced magical and spiritual beliefs.

He started out giving seminars from his apartment, making it his mission to pass on his new-found views. Then in 2009 he ran as an independent candidate in Germany’s parliamentary elections but received only 0.7 percent of the vote in the constituency.

This prompted the 48-year-old to set up his very own sub-state known as ‘New Germany’. He is convinced that he can serve his people better than Germany’s current political system and stresses the need for a single strong – but benevolent – leader.

A three-month kingdom in a castle

Fürstentum Germania, founded in December 2008 by a group of right-wing separatists, was an equally bizarre phenomenon – even if it did only last for three months. According to its members – who numbered 300 in March 2009 – it was an “independent church state” with its own constitution.

Setting up shop in a derelict castle in Perleberg near Berlin, the right-wing collective had its very own blue, red and gold flag hanging above the castle’s entrance. But, unlike Fitzek’s kingdom, it never got round to printing its own passports or driving licences.

But their outlook was more extreme than Fitzek’s. The ‘King of Germany’ denies the authority of the federal constitution, whereas Jens Willman, a craftsman from Bremen who was part of the group, denied the existence of the German federal state altogether.

Germany, he said, was still in the grip of the occupying powers. “We want to live independently, not under the house rules of the German constitution,” Willmann told the Tagesspiegel in March 2009.

In the German media Fürstentum Germania’s members were portrayed largely as right- and left-wing extremists and conspiracy theorists – people living on the fringes of society.

Its citizens included members of the Provisional Imperial Government (KRR in German), a term for people who claim the German Reich still exists in its pre-World War Two borders. And Jo Conrad, one of the collective’s heads, has written anti-Semitic conspiracy theory books, accusing Jews of involvement in the September 11th attacks.

But Fürstentum Germania was something of an enigma. When its members spoke to the Tagesspiegel they said their focus was on grassroots democracy, peaceful community living, environmentally-friendly agriculture and renewable energy.

And one of their main principles was to live without money. These are values more commonly associated with the left rather than right-wing extremists.

The so-called Reichsbürger are a more overtly far right group. According to the website of the Reichsbürger-Union, “Germany was without doubt the leading European nation in the world before the [Second World] war”, whereas it is now home to “a dying people”, with poor education, discipline and loyalty.

Like Fürstentum Germania, the Reichsbürger deny the notion of the Federal Republic of Germany, and claim to represent a separate German state.

In November 2012 bizarre incidents were reported of Reichsbürger operating above the law and arresting a bailiff who had come to collect a man’s debts, the Frankfurter Rundschau reported.

When the bailiff arrived at the man’s door in Bärwalde near Dresden in eastern Germany, he called the police but instead of federal officers, members of the Reichsbürger’s ‘German Police Support Unit’ arrived.

The independent police organization arrested the bailiff who they reported was unauthorized to collect money. Eventually state policemen came to his rescue and freed the falsely accused debt collector.

According to the Frankfurter Rundschau, the group’s ties to the neo-Nazi scene are beyond question. “Several of the leading members were former officials of the extreme right,” said Kerstin Köditz a representative in Saxony’s regional Parliament.

Over the past few years courts have sentenced supporters of the German Reich with hate crimes, identity fraud and the unauthorized assumption of authority, the Frankfurter Rundschau reported.

It is all a far cry from Fitzek and his fake driving licence, but the ability of citizens to establish their own not-for-profit organizations with independent powers is exploited by eccentrics and extremists alike.