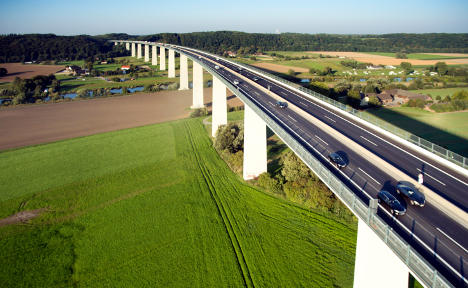 A survey for the Bild newspaper on Thursday showed 62 percent of Germans wanted to see a charge on foreign drivers introduced.

But the EU Commission warned against it saying it would contradict European equality and discrimination rules.

Chancellor Angela Merkel’s Bavarian allies, the CSU made the road toll for foreigners one of their main pledges in the elections on September 22nd.

Both Merkel’s CDU and the Social Democrats (SPD) came out against the toll during the election campaign but it will be discussed by the three parties as they look to form a “grand coalition”.

CSU head Horst Seehofer made the introduction of the toll a condition of his alliance with Merkel’s CDU during the campaign.

And Focus Online reported that the parties would look at the “vignette” model which exists in Switzerland where people driving into the country have to buy a pass to use the roads.

Executive Secretary of the CSU Alexander Dobrindt said: “The charge for foreigners is good for Germany and good for infrastructure.”

The Welt newspaper said that there was a way around the EU rules if the charge was decoupled from road tax reductions.

It would involve restructuring road financing so that both foreigners and Germans were initially charged the fee.

Road taxes for Germans would then be reduced to take the fee into account while foreigners would continue paying the toll.

Hamburg administrative lawyer Holger Schwemer told the Welt that there could be a temporal decoupling of tolls and tax reductions.

But the reform would take time to get through and rely on the backing of the SPD who are set to form a “grand coalition” with Merkel’s CDU and the CSU.