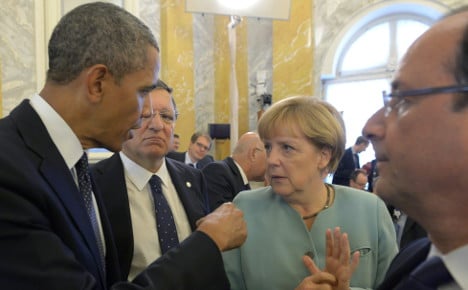 “We need trust between allies and partners, and such trust needs to be restored,” she said on arrival at an EU summit in Brussels.

Germany has reacted with anger over allegations the NSA tapped Merkel’s phone. Developments on Thursday include:

-Germany summoning the US ambassador in Berlin;

-The federal prosecutor’s office in Karlsruhe, part of the Ministry of Justice, intervening by stating on Thursday lunchtime it will investigate the case;

-Merkel’s phone number found in documents leaked by NSA whistleblower Edward Snowden. According to the Welt newspaper it was her old Nokia phone number;

Merkel’s mobile phone is expected to be examined by security services on Thursday to see whether it may have been tapped and what information could have been gained from it, the Bild newspaper reported.

And the revelations have also dominated the European Union summit in Brussels which was supposed to focus on economic issues.

European Commission president Jose Manuel Barroso said, in reference to life in Communist-era East Germany, that not so long ago “there was a part of Germany where political police were spying on people’s lives daily”.

“We have recent experience of what totalitarianism means,” he said. “We know what happens when a state uses powers that intrude on people’s lives.”

In Berlin German Foreign Minister Guido Westerwelle is meeting with US Ambassador John Emerson in a highly unusual step between the decades-long allies.

The US embassy in Berlin declined to go into details about the meeting or how the latest spy allegations would affect German-US relations when asked by The Local.

But a statement from the White House last night claimed that despite the alleged phone tapping, Merkel and Obama had agreed to “intensify further cooperation between our intelligence services.”

Merkel and Hollande, due to meet on the margins of an EU leaders’ summit overshadowed by the growing scandal, “will also obviously discuss it and how to coordinate their response,” a French diplomatic source told AFP.

Outrage among press and politicians

The Welt newspaper called the alleged snooping a “diplomatic bomb” and “a punch in the face of German security agencies”, while a Süddeutsche Zeitung headline labelled it “the worst imaginable insult”.

Der Spiegel, which broke the story on Wednesday evening said politicians across the spectrum were outraged by the news.

Defence minister Thomas de Maizière said: “The Americans are and will remain our best friends, but it is not on.” He warned there would be consequences for the trans-Atlantic alliance if the allegations were true.

Politicians across party lines condemned a betrayal of trust between the allies, echoing the sharp rebuke Merkel delivered in a phone call to US President Barack Obama the previous day.

If confirmed, the snooping would be “an outrageous act” that “reaches a new level” and would be “roundly condemned”, said the chief whip of Merkel’s conservatives, Michael Grosse-Brömer. He added it would be a “massive breach of trust”.

The leader of the far-left Linke party, Gregor Gysi, found sharper words, saying the “insolent actions of the USA must be stopped” and that the US “is not a power that owns the world”.

The Green party sharply attacked Merkel’s government for having declared the National Security Agency (NSA) spying affair – centred on the surveillance of millions of citizens’ phone calls, emails, chats and other communications – effectively over in August.

“It’s scandalous that the government appeased and obscured throughout the entire NSA affair, but that now, when it comes to confidentiality of communications of the chancellor, Merkel voices personal indignation in a phone call to the American president,” Greens lawmaker Konstantin von Notz told the Handelsblatt daily’s website.

The Welt also recalled how little Merkel did when it was citizens, not herself, who were being spied on, according to the claims of fugitive US intelligence contractor Edward Snowden.

Bild said the German government’s “strongly-worded” statement was as critical as it could be while still being diplomatic.