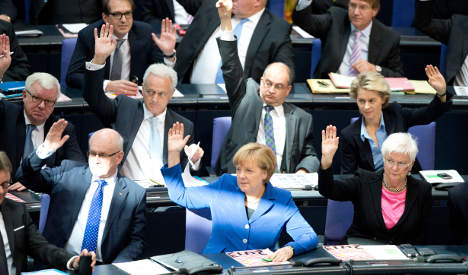 The first Bundestag session since the September 22nd vote was largely ceremonial as Merkel was confirmed as head of a caretaker government while she hammers out a coalition deal with the defeated Social Democrats (SPD).

Those talks kick off Wednesday after Merkel's conservatives and the centre-left party last week formally committed themselves to seeking a "grand coalition" government, a process of political haggling that could drag on for many weeks.

Officially Merkel and her outgoing government were to be discharged from their posts later Tuesday by President Joachim Gauck, even though they will keep ruling until her Christian Democrats (CDU) find partners for a new governing majority.

In an unusual twist, cabinet ministers from Merkel's former allies the pro-business Free Democrats were to stay on in their posts for now but had to sit in the visitors' gallery Tuesday after their party crashed out of parliament in the election.

As the new 631-member lower house of parliament gathered under the huge glass dome of the Reichstag building in Berlin, about one-third of the legislators were newcomers.

The new parliament, the 18th in post-war Germany, has a record number of women, at 36 percent, and of legislators with migrant backgrounds, at 5.9 percent, a ratio that is however only one-third of the nationwide statistic.

One new face that drew much attention was that of former wrestling bad guy Matthias Ilgen, 29, who has swapped the black cape and fake sword he wore in the ring for suit and tie to do battle on the floor of parliament for the SPD.

Another professional entertainer turned political pro is Charles M. Huber, 56, who long played a cop in the popular German TV series Der Alte and has now entered parliament for the CDU.

The son of a German woman and a Senegalese diplomat told the Tageszeitung newspaper that he picked a Harley-Davidson motorcycle as his official vehicle, which he however said he does not plan to ride to work until the summer.

Another newcomer was Germany's first African-born national legislator, the SPD's Karamba Diaby, 51, a trained chemist who also hails from Senegal and who represents Halle, a district in the formerly communist east.

While the first session of parliament was a celebration of democracy, featuring lengthy speeches and a rare rendition of the national anthem, some legislators voiced concern about the looming power balance.

If Merkel's “grand coalition” talks lead to the expected left-right alliance ruling Europe's biggest economy, the government benches would dwarf those of the opposition, which controls only about 20 percent of seats.

The smaller Greens and far-left Linke party have warned that this will deprive them of key control mechanisms, such as the right to demand parliamentary inquiries, for which they would need 25 percent of votes.

Gregor Gysi, head of the Linke, said on Berlin radio that without an effective parliamentary opposition "we give up on a key component of democracy".