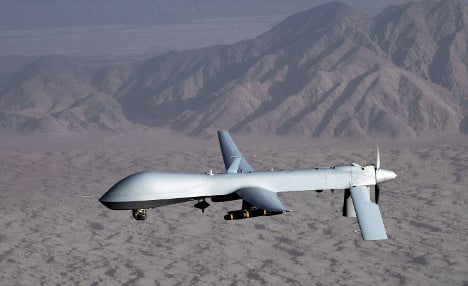 The report accuses Chancellor Angela Merkel’s government of providing the US intelligence service with data on drone targets, including the mobile phone numbers of victims.

According to information provided by retired Pakistani intelligence officials, relating to this year and 2012, “secret services in Germany and in other European states have worked together with the USA and its drone program in Pakistan”.

The Amnesty report stated: “With the deployment of armed drones, the USA has once again broken international law. Some of the attacks even amount to war crimes.”

Verena Harpe from the German branch of Amnesty International condemned the programme as “a license to kill, which completely ignores human rights standards and international law.”

She also criticized President Barack Obama for failing to deliver on his promises to make the drone programme more transparent. She said: “The US government does not take responsibility for specific attacks,” the Welt newspaper reported.

Amnesty’s Pakistan expert, Mustafa Qadri said: “We are publishing this report to push governments, including Germany’s, to reveal its role in the US drone programme.

Amnesty staff examined all 45 drone attacks that took place between January 2012 and August 2013 in the tribal region of North Waziristan along the Pakistani border with Afghanistan.

In October 2012 a 68-year old woman was killed in front of her grandson whilst working in the fields. Children were also seriously injured in another aerial attack. In July 2012 US drones killed 18 Pakistani villagers who were only subsequently identified as militants.

The deployment of drones will be discussed at a meeting in Washington between the Pakistani Prime Minister Nawaz Sharif and Obama on Wednesday. For a long time the Pakistani government has called for an end to the attacks carried out in its border region with Afghanistan, but the US has continued with the attacks.

The CIA deploys the unmanned aircraft to target and kill suspected insurgents. The Office for Investigative Journalism in London estimates that in the 376 drone attacks carried out since 2004, 2,525 to 3,613 people have been killed. Between 407 and 926 of these were civilians and 168 to 200 were children, it said.