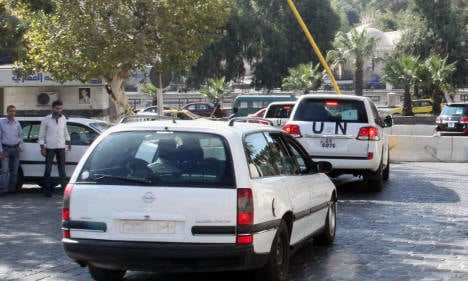 Photo: DPA. Weapons inspectors have a dangerous job in Syria.

Was it an attack or an accident that tore through the building and shattered the calm of the foggy countryside? What are the immediate threats? What to do?

With real-life scenarios such as this one, as well as simulated combat and hostage situations, the German military is training chemical weapons inspectors headed into Syria.

“If you venture into places like this, you should forget Hollywood,” said Colonel Reinhard Barz, head of the German military’s UN Training Centre in Wildflecken, Bavaria.

Most people only know such situations from war movies or media reports and, if headed there, need realistic hostile environment “awareness training”, said Barz.

This is especially true for Syria, “certainly one of the hottest patches we have right now”, he told AFP.

The inspectors will have to cross territory controlled by different armed factions, may come under fire and face explosives attacks, “and they must realize that they could be wounded,” said the colonel.

Syria’s civil war has claimed more than 100,000 lives in two and half years.

Many members of a new batch of 24 inspectors from the Organization for the Prohibition of Chemical Weapons (OPCW), the body that won this year’s Nobel Peace Prize, are headed straight to one of the world’s worst frontlines, some as early as this week.

To prepare them for the dangers that await, OPCW arms specialists, chemical weapons experts and translators from 17 countries joined the training course last week at the German Bundeswehr’s United Nations Training Centre.

“All of our inspectors have to go through this course,” said Franz Ontal, head of inspector training at The Hague-based OPCW, who called the time in Germany “very rewarding”.

Ontal said that, despite the organization’s long-standing expertise with chemical weapons, “the difference now is that we are active in the middle of an ongoing conflict”.

The mission resulted from a US-Russian agreement after the United States threatened the Damascus regime with punitive strikes over a deadly August 21st chemical attack attributed to the forces of President Bashar al-Assad, who has denied culpability.

About 60 experts and other staff of the UN and the OPCW have been engaged in Syria since October 1st, with their numbers set to be boosted to up to 100.

The Bundeswehr centre every year trains some 12,000 soldiers and police, UN staff, employees of various organizations that operate in dangerous areas, including from the Organization for Security and Cooperation in Europe, and participants in European Union missions.

Ontal said he was happy with how the inspectors, who were wearing helmets and flak jackets for the exercise, reacted to the explosion scenario.

“They immediately recognized that it was an accident in the chemical weapons storage facility and not a hostile situation,” he said. The inspectors gave first aid, applied bandages and took the wounded to safety. “They reacted exactly as they were supposed to,” said Ontal.

It’s a tight timeframe, said Ontal, a US citizen who is also headed for Syria. “Even in a country at peace, such a mission would usually take years,” he said.