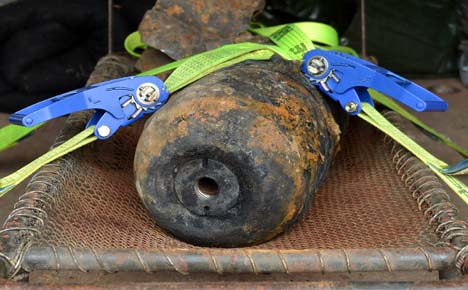 “The railway line, near the site of the bomb, was partially closed for security reasons for two hours on Saturday morning,” a police spokeswoman told AFP.

The bomb was uncovered without its detonator during repair works and removed by police, who deemed it unnecessary to evacuate nearby homes.

The operation caused disruption to local and national services around the German financial capital, a spokesman for the state-owned Deutsche Bahn rail company said.

German soil is still riddled with unexploded bombs dating back to the war, an omnipresent reminder of the Allied bombing campaign against the Nazis.

More than six decades after the war, authorities believe there are still some 3,000 bombs buried beneath Berlin alone.

In June 2010, a 500-kilogramme Allied bomb, thought to be British, exploded and killed three German sappers, and seriously injured two others in the central city of Göttingen as they prepared to defuse it.