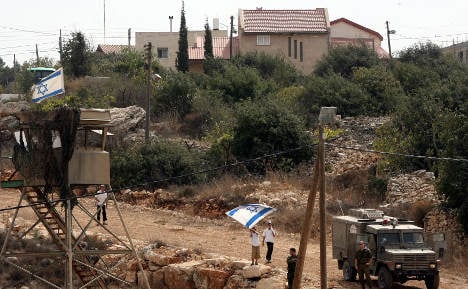 “We call on Israel to show restraint in the matter of settlement building,” Merkel told a joint press conference with Abbas in Berlin.

Germany has warned that the plan to build 3,000 settler homes in a highly volatile area of the West Bank – which comes a day after the UN General Assembly’s announcement that Palestine will be recognized as a de facto state – could be the final nail in the coffin for a two-state solution.

New construction in Jewish settlements on occupied Palestinian land rose by 70 percent on 2012 in the first half of 2013, anti-settlement group Peace Now reported on Thursday.

Settlement-building in the territories occupied by Israel during the Six Day War of 1967 is considered illegal under international law. It is one of the most divisive issues in the Israeli-Palestinian conflict.

“We ask the Israeli government to stop this activity,” he told reporters through an interpreter.

Merkel reiterated Germany’s support for the peace talks and a two-state solution, while Abbas thanked Germany for its economic support and its role in the peace process.

“We are serious in our efforts to conduct the negotiations,” he said, and added: “We should seize this historic chance” – an appeal directed at the Israeli government.

Merkel also stressed that Germany’s foreign policy would continue in the same vein as before despite the likely formation of a left-right grand coalition, which is currently being negotiated between the Christian Democrats and the Social Democrats.

Merkel said: “Of course we spoke about it … we agreed to disagree,” Reuters reported.

“Israel decides for itself, it is a sovereign state. All we can do as a partner is give our opinion and our evaluation. The aim is clear … it is for a two-state solution,” she said.

“We in Germany believe the work on a two-state solution must be continued… We must keep trying to come to negotiations and one-sided moves should be avoided,” Merkel added.

Palestinians argue that new settlements on their land could split the West Bank in two and restrict their access to Jerusalem, their potential capital.