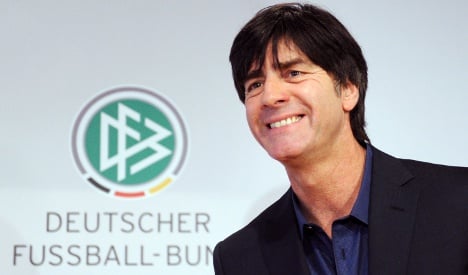 Löw’s existing deal runs until the 2014 World Cup in Brazil, but both the manager and DFB president Wolfgang Niersbach had made it clear they wanted the arrangement to continue after the tournament.

“Since the 2006 World Cup, the national team has finished in the top four at each World Cup and Euro and they qualified brilliantly for the 2014 World Cup in Brazil,” Niersbach said.

“All credit must go to Joachim Löw and his team and the DFB wanted to show our confidence in them.”

Löw, 53, praised the DFB, saying that they provided the ideal platform for footballing success.

“We are not yet at the end of our journey and still have some big objectives ahead of us,” he said.

Under Löw Germany made it through to the final of Euro 2008, where they lost 1-0 to Spain, came third at the 2010 World Cup in South Africa, and reached the semi-finals of Euro 2012.

And Germany sailed through qualification for next year’s World Cup remaining unbeaten in their group. The campaign culminated in Tuesday’s 5-3 win over Sweden.

Since Löw took over from Jürgen Klinsmann after their third place in the 2006 World Cup on home soil, Germany’s record stands at 68 wins out of 99 matches.

But ultimate success has eluded the Germans, with their last title win coming at the Euro 1996 championships in England.