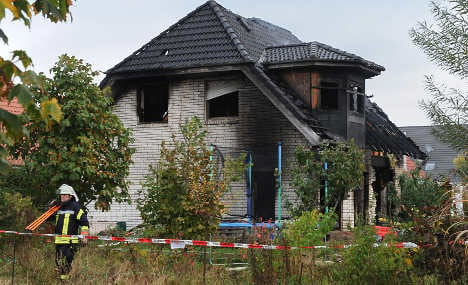 A 42-year-old man, his 46-year-old wife and their 6-year-old daughter were all killed in the fire in Wiefelstede in Lower Saxony.

“We’re treating this as a suicide,” said police spokesman Mathias Kutzner on Thursday. “We don’t have any clues pointing to another explanation.”

The investigators have evidence that financial problems, including the foreclosure of their home, were weighing down on the family. Kutzner referred to a letter found in the ruins of the home, as well as online posts which hinted they were under financial stress.

All three were still alive at the point the fire broke out, according to police, but died after the blaze caused a loud explosion in the house.

It is unclear as yet whether the couple planned the desperate act together, or whether one parent caused the deaths of the rest of the family.

Eyewitnesses reported a sudden burst of flame. One neighbour called the fire brigade before trying to go into the burning house himself. But he was forced to retreat.

The neighbourhood, in the suburbs of Oldenburg, is less than 20 years old, full of neat, detached houses and well-kept gardens.

“The couple had a huge run of bad luck,” said another neighbour. “They were in a lot of debt, since the property developer, who was a friend of the family, went bankrupt,” she explained.

The house had not been completed at the time of the fire and the family were living there temporarily.

“The father worked, he looked after his family and loved them,” said Addicks.