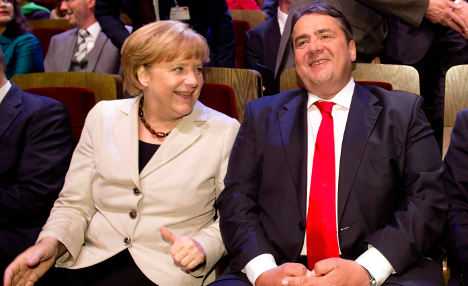 Almost a month after the elections, the leaders of Merkel’s CDU, her Bavarian allies the CSU and the centre-left party the SPD, struck the agreement in their third round of exploratory talks, the Bild newspaper and national news agency DPA said, citing delegation sources.

Merkel’s conservative bloc comfortably won the elections on September 22nd but fell just short of a majority meaning they need to find an ally to govern with.

Their previous coalition partner, the Free Democrats (FDP), failed to get five percent of the vote needed to return to parliament.

That left Merkel with the choice of either forming a “grand coalition” with Germany’s second biggest party, the SPD or teaming up with the Green Party.

Exploratory talks between the conservatives and Greens broke down on Tuesday night, leaving the path open for a “grand coalition”.

But the SPD will be seeking every advantage it can from Merkel before officially forming a new government. Its last taste of coalition with the chancellor from 2005 to 2009 left it trailing in the polls.

The Social Democrats have made introducing a nationwide minimum wage of €8.50 an hour one of the cornerstones of any coalition agreement.

Merkel says this would cost jobs and favours traditional negotiations between employers and unions that work out different wage deals by industrial sector and geographic region.

CSU chief Horst Seehofer has declared he may accept a minimum wage in return for no tax rises.

A compromise could be an in-principle agreement on a minimum wage, but with the level determined by a committee of unions and employers.

The SPD also wants to open more child-care centres to help working families and rejects as outdated and sexist a state benefit critics call the “stove bonus”, for parents who care for toddlers at home. But the programme is a flagship policy of Bavaria’s CSU, which wants to keep it.

The Social Democrats have also called for equal tax and adoption rights for same-sex couples and a women’s quota in corporate boardrooms.

Seehofer signalled he may soften his opposition to another SPD demand – allowing dual citizenship. This would especially help the children of millions of Turkish and other immigrants who must now decide when they reach adulthood whether to take German or their ancestral citizenship.

The ideological and policy differences between the parties which stand in the way of any coalition agreement, will force both sides to haggle and hammer out compromises.

To fund badly needed investment in infrastructure, education and welfare, the SPD says €80 billion must be spent per year, which it wants to finance with higher taxes for the rich.

SPD leader Sigmar Gabriel has said that a tax rise is “not an end in itself” if other solutions can be found.

But on foreign and eurozone policy, the big parties are much closer, and the SPD in opposition supported all of Merkel’s major policy moves to combat the eurozone debt and economic crisis.

The SPD’s chancellor candidate Peer Steinbrück has called for greater solidarity with crisis-hit countries where youth unemployment has soared, and recalled that after World War Two Germany received aid and debt forgiveness from its former foes.

However, on concrete measures, the parties basically agree to keep supporting recession-hit countries in return for economic reforms and to

consent to a third bailout plan for Greece.

On Germany’s ambitious energy transition away from nuclear power and toward renewables such as wind and solar, both sides agree that clean energy subsidies must be reduced to lower consumer electricity bills and have stayed sufficiently vague on details to leave the door open to compromise.