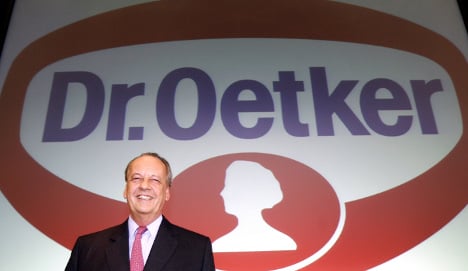 In an interview with newspaper Die Zeit on Wednesday the firm’s chairman, August Oetker, 69, admitted that his father was a Nazi.

Rudolf-August Oetker, who ran Dr Oetker after World War Two and died in 2007, volunteered for Hitler’s SS and joined the Nazi Party in the thirties. The firm also profited from its close relationship with Hitler.

“My father was a National Socialist,” his son August said. “He didn’t want to talk about this time. He said, ‘children, leave me in peace’.”

He added his father had been influenced by the times and by his step-father Richard Kaselowsky who was a leading supporter of Hitler and ran Dr Oetker which is based in Bielefeld, northern Germany.

A book being published this Monday called “Dr Oetker and National Socialism” studies the history of the family’s and firm’s links with the Nazis.

Rudolf-August never said how involved he and his firm were in National Socialism in public. “Perhaps he wanted to redact part of his life. I can understand that. But nothing gets better by doing that,” his son said.

August Oetker welcomed the research into the Nazi past which has been funded by the firm. “I feel now we know the facts, now the fog has lifted,” he said.

But there were differences in the family over whether to research Rudolf-August’s past. He said some of his younger siblings asked if they were harming their father by doing it.