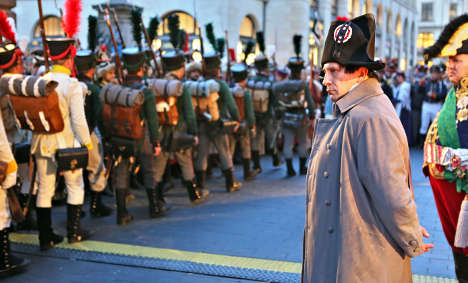 In front of nearly 30,000 spectators, some 6,000 history buffs from across the continent will act out the Battle of Nations of October 1813, which were among the bloodiest in 19th century Europe.

At the time, the Prussian monarchy with allies Austria, Russia, Sweden and Britain dealt another major blow to Napoleon’s forces, who were already weakened by their disastrous Russian campaign.

However, the re-enactment on Sunday is dedicated to the “reconciliation” of people, said Michel Kothe, a member of the Battle of the Nations Association which is organizing the event.

“Contrary to what happened at the time, people from 28 nations will peacefully camp together before the battle,” he said.

The star of the show will be Frank Samson, a 46-year-old Parisian lawyer who specializes in traffic offences, but regularly assumed the mantle of Napoleon.

Like all the extras, this 19th century aficionado is a volunteer. “It has sometimes been suggested that I get reimbursed, but for me it’s a hobby,” he told AFP. “In Leipzig I pay for everything.”

According to him, the uniform he will wear as Napoleon cost between €1,000 and €1,500 but some other military outfits are more

Just like Samson, who takes his wife and two sons to almost all his Napoleonic adventures, many of the rank and file extras have also convinced

women and children to participate in the show.

To perfect his role, Samson has spent a year and half learning Corsican, Napoleon’s mother tongue. “I never speak English on a battlefield because Napoleon didn’t know the language,” he said.

He has also practiced horse riding for seven years. As a lawyer, he said, he is used to “role-playing”. He says that to impersonate Napoleon, he has learnt to play a man who is “irritable and choleric” and walks so quickly “that the officers are constantly running after me”.

He said Napoleon was often yelling at his officers, for which he was “worshipped by the soldiers”.

Samson is at 1.72 metres is two centimeters taller than his historic hero, as recorded by the British doctor who performed the

The victory of Leipzig in 1813 signalled the end of Napoleonic domination of the German states and had a huge impact there.

“It became a powerful national myth,” said Martin Schulz, the German president of the European Parliament, who will deliver a speech Friday night in the eastern German city.

Germany, for centuries made up of a multitude of small states, would continue its long march towards unification following the Leipzig battle. This

culminated in 1871 under Prussian leadership after France had again been defeated.