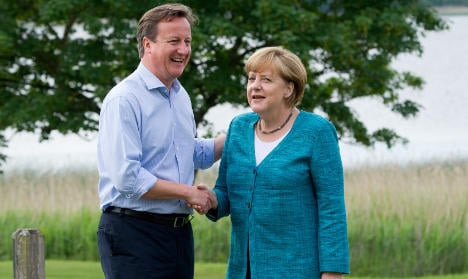 It comes on the back of British Prime Minister David Cameron’s speech in January to renegotiate the UK’s relationship with the European Union and reform it.

The 60-page report covers a range of industries from shale gas to health and safety regulations and will form part of Britain’s case to be made on October 24th at the European Council to reform EU economies.

But to abolish red tape or to take any of the recommendations forward, Britain will need the support of the continent’s biggest economy and Chancellor Angela Merkel.

Head of Press at the British embassy in Berlin William Gatward told The Local: “Germany and Britain have a close partnership and a shared agenda and we hope we can work together to effect real change within the EU.

“We know it is an area where the German Government, Chancellor and BDI [Federation of German Industries] agree.”

A German government spokesman told The Local they welcomed the British report and findings which it said made important points in the efforts to cutback bureaucracy and reduce the burden of red tape.

In April on a visit to Berlin, Cameron and Merkel spoke of the need for “urgent” action to make the European Union more competitive.

Speaking to German TV in August, Merkel said: “I believe that in Europe at the moment we have to take care to coordinate our competitiveness more closely, and for that we don’t have to do everything in Brussels.”

Professor Michael Wohlgemuth, Director of think-tank Open Europe Berlin said Britain should find its most convincing ally in the German government and also find support among the country’s entrepreneurs.

“Britain will need Merkel and German support to get any of these recommendations through. In principle, the German government – even a grand coalition of conservatives and social democrats – shares the same philosophy of deregulation and market-driven competitiveness,” he told The Local.

“All European enterprises need to become more competitive on a global market and Merkel knows that. Cameron’s initiative shows how to foster growth and global competitiveness without spending (future) taxpayers’ money.

Cameron is sending a copy of the report to European leaders and the British Government has published it in five languages.

“All too often, EU rules are a handicap for firms, hampering their efforts to succeed,” Cameron said of the report. “There are lots of simple and practical ways to cut EU red tape and save businesses across Europe tens of billions of euros,” Reuters reported.

Scrapping the rule that forces companies to keep written records of health and safety risk assessments could save companies across the EU around €2.7 billion, the report claimed.

It added: “But it isn’t enough just to remove existing rules: Europe must avoid adding new ones. And when new rules are necessary they must be unashamedly pro-growth.”