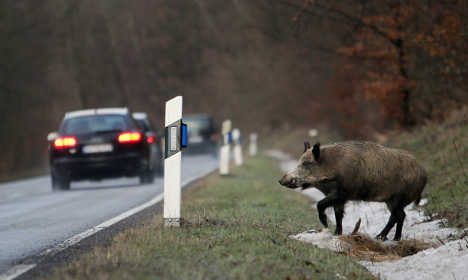 In the 2012-13 hunting season there were 210,000 road accidents in the country involving wild animals, an increase of seven percent on the year before, hunting association DJV said.

Twenty people were killed and 3,000 were injured in the accidents. The damage as a result of the accidents is estimated at €500m.

The number of accidents involving wild boars has risen most significantly. In the last year, 22,000 wild boars were reportedly killed in road accidents. It is unclear whether this is down to an increase the population of wild boars or in the animals’ increasing fearlessness of traffic.

And 180,000 deer were also killed in road accidents, an increase of five percent. The DJV said: “A deer dies on Germany’s roads every two-and-a-half minutes.”

To reduce the number of animal deaths in future the DJV has teamed up with national motoring organization ADAC and the Institute of Wildlife Biology in Göttingen on a research project.

They have tested fences containing scents to keep animals off the road and blue reflectors in 25 areas of the state of Schleswig-Holstein. The number of road accidents with animals fell by 80 percent.