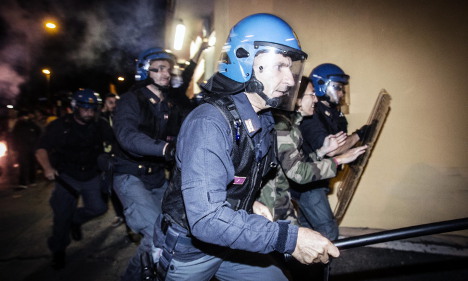 Catholic breakaway traditionalists from the ultra-conservative Society of St Pius X had agreed to hold the funeral of former SS officer Erich Priebke at their seminary in Albano, a town near Rome.

But mayor Nicola Marini and hundreds of residents turned out to complain about the last-minute decision, following Priebke’s death on Friday in Rome, where he had been under house arrest.

“Assassin!” the protesters shouted as the hearse drove into the religious compound for the start of the ceremony, which was quickly suspended by a police order when neo-Nazis broke into the area.

“Take him to the landfill,” one man shouted as the black hearse passed through the crowd, while others sang the Italian partisan song “Bella Ciao” and held up a banner reading “Priebke the Hangman”.

The far-right militants, some 30 of whom had gathered, gave Nazi salutes and sang fascist chants.

“We are here to celebrate his memory because he was part of our world,” said Maurizio Boccacci, head of the extreme-right Militia movement.

Mayor Marini issued a last-minute decree to try to prevent the hearse crossing his town, saying it had been a centre of the resistance during World War Two. But the ruling was struck down by the Rome prefecture.

Dozens of riot police pushed about 500 protesters back and later fired tear gas after clashing with a few dozen neo-Nazis who attacked with glass bottles and chains, shouting: “He was a hero.”

A priest from the Society of St Pius X also had to be protected by police as he tried to enter the seminary after being shoved by the protesters.

The funeral was eventually called off, with Italian authorities particularly concerned as tensions were already running high ahead of Wednesday’s 70th anniversary of a raid by Nazi troops that cleared out the city’s historic Jewish quarter.

Priebke, who was 100 when he died, was convicted of the 1944 massacre of 335 people, including 75 Jews, at the Ardeatine caves near Rome in a Nazi retaliation for a partisan attack.

The Holocaust denier, who claimed he was only following Gestapo orders, has continued to cause uproar even in death with an international controversy over his funeral and final resting place.

“This is a moment of mourning and has nothing to do with politics. We have done our best to respect the feelings of his critics,” his lawyer Giachini told reporters before the funeral ceremony got underway.

But on Wednesday Priebke’s body appeared set to go to Germany. “We are planning to resolve the situation today. We are in contact with Germany,” Rome prefect Giuseppe Pecoraro told reporters.

Father Floriano Abrahamowicz, a St Pius X priest, defended the controversial decision to host the funeral, telling Radio 24 that “Priebke was a friend of mine, a Christian, a faithful soldier.”

“His was the only case of an innocent man behind bars. It’s a scandal how he was persecuted in Italy while immigrants are received with dignity,” he said.

The funeral coincided with a silent procession through the Rome Ghetto in honour of the more than 1,000 Jews who were taken away to concentration camps of whom only 16 came back alive.

Italian media reports suggested that the authorities wanted Priebke cremated, amid fears a burial could become a rallying point for far-right groups.

Argentina, where Priebke lived for nearly 50 years before being extradited to Italy and where he wanted to be buried, has refused to take the body.

The body was left at the seminary overnight, but the next moves, towards a probable cremation, were undecided.

The Vatican also issued an unprecedented ban on celebrating the funeral in any Catholic church in Rome, although it said a priest could officiate a private ceremony at home.

Jewish groups and relatives of the massacre victims have said the body should be cremated in Germany and the ashes scattered to erase his memory forever.

He was sentenced to life in prison in 1998, but because of his age and ill-health was allowed to serve out his sentence at home.