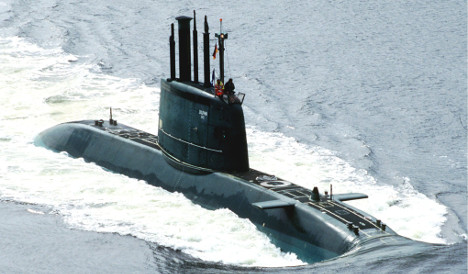 German industrial conglomerate ThyssenKrupp bought Kockums in 2005 to form part of what is known as ThyssenKrupp Marine Systems (TKMS), a firm which also owns German submarine maker HDW, a direct competitor of Kockums.

A source told The Local that the purchase was aimed at getting rid of Germany’s Swedish submarine rival and that TKMS was jeopardizing Swedish export deals for submarines with the Australian and Singaporean governments.

“The purchase of Kockums wasn’t aimed at consolidating the naval industry and creating synergies, but at getting rid of a competitor,” a source in Germany with direct knowledge of the situation told The Local.

Kockums and its predecessors have been building ships for the Swedish navy for centuries at the Karlskrona shipyard in southern Sweden that now serves as the base of the company’s Swedish operations.

But according to a German naval manufacturing consultant with ties to TKMS, ThyssenKrupp is actively trying to sabotage Kockums export operations to the advantage of Germany’s HDW, a strategy he dubbed “TKMS über alles” and slammed as “suicide”.

The Germans’ efforts to sink Sweden’s submarine industry have been ongoing since at least 2011, according to the source, when TKMS CEO Hans Christoph Atzpodien denied Kockums the opportunity to bid on a project in Singapore for the construction of new submarines, despite the Swedish firm’s long-standing relationship in the country.

Earlier this year, the German firm decreed that the Swedish shipbuilder officially change its corporate name to ThyssenKrupp Marine Systems, scrapping the Kockums brand name that has been a part of Swedish industry since the early 1800s.

‘A raging war is taking place’

In August, during a meeting in Bonn, Germany with officials from Singapore defence agency DSTA held, Atzpodien claimed that Kockums “would no longer be capable of designing and building submarines”, according to the source.

“A raging war is taking place between Kockums and TKMS,” he said, explaining that the Singapore deal has brought the situation into sharp relief.

Among other things, Atzpodien disparaged Kockums plans for a new A26 class of submarine, claiming the Swedish firm didn’t have enough engineers to complete the project, and that it was sure to be plagued with cost overruns and delays.

TKMS has also complicated Kockums’ chances for new contracts in Australia, another country where the Swedish shipbuilder has a strong presence, having designed and built six Collins-class submarines in the 1990s in what was one of the largest export deals ever at the time.

But Kockums found itself left out of a 2012 initial call for proposals from Australia to replace the aging subs with an off the shelf solution, while its German-based competitor and sister company HDW was one of three European firms asked to participate.

Earlier this year, however, Australia and Sweden did ink a deal allowing for Kockums to take part in the project, dubbed SEA 1000, which calls for the building of 12 new submarines.

But in the meantime, TKMS purchased an Australian naval defence firm, Australian Marine Technologies, that “could do the same job as Kockums could have done on its own,” the source said.

“TKMS has here again torpedoed all the efforts of Kockums to run this future competition because it has already created its own footprint,” the source told The Local.

The Swedish government, as well as officials with the primary defence procurement agency, the Defence Materiel Administration (FMV), has been made aware of the situation and have become so unhappy they have asked Swedish defence contractor Saab to look into a possible purchase of Kockums, a source within the Swedish defence industry told The Local.

“Discussions are taking place right now,” according to the source, who agreed that TKMS is trying to strangle Sweden’s ship building industry.

“The only reason TKMS owns Kockums is to stop them from exporting,” the Swedish source explained, adding that the Swedish firm “could not exist” without export contracts.

Allan Widman, a Liberal Party (Folkpartiet) MP from Malmö and the party’s defence policy spokesman said he is “worried” about Kockum’s future in light of the rift with TKMS.

“Submarine building capabilities are essential for our armed forces and our ability to defend ourselves,” he told The Local, adding that he had heard a number of “industry rumours” about the discord between TKMS and Kockums.

Adding to his concern is the fact that two years have passed since the Swedish parliament Riksdag approved funding for the development of the A26 submarine for the Swedish navy, but nothing has happened, reportedly due to concerns over ThyssenKrupp’s ownership of Kockums.

“I hope Kockums isn’t prevented from doing business with other countries. It’s not constructive,” said Widman, adding he would welcome Swedish ownership for the Karlskrona-based shipbuilder.

“I would have no objection to private Swedish ownership of Kockums,” he said when asked about the Saab deal.

However, if the Swedish and German firms can’t strike a suitable deal to resolve the situation, Widman said the dispute may require a “political solution”.

“This is a matter that’s vital to our national security,” he said, stressing that he hopes both Germany and Sweden can maintain submarine building capacity.

“In the end, however, it may require a political dialogue between Sweden and Germany to find a suitable solution.”

When reached by The Local for comment on the Saab-Kockums negotiations, a Saab spokesman refused to comment.

“We don’t speculate on rumours like that,” the spokesman said.

A spokesperson with FMV also chose not to comment citing an “ongoing procurement”.

A spokesman with Kockums in Sweden also refused to comment on the reported disunity within TKMS, while spokeswoman with TKMS in Germany said the company was “unable to comment on market rumours”.

Do you have a story tip for The Local? Email [email protected]