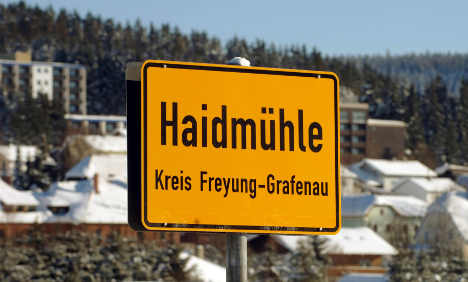 The town of Haidmühle in eastern Bavaria closed its crossing with the Czech Republic after suspecting its neighbours of being responsible for burglaries over the summer.

But the Czechs, who were not informed of the decision have reacted angrily, newspaper the Münchner Merkur reported.

The idea to construct the barricade reportedly came about when locals met for a drink at the pub. Haidmühle’s mayor Fritz Gibis reported a “small gathering of citizens”.

In the past a barrier was used in the same location but was removed when the Czech Republic entered the European free travel area known as the Schengen zone in December 2007.

The 71-year-old mayor, who is responsible for the barrier’s construction, has stressed that the barrier is “not forever” – just until peace has been restored.

“The fire brigade and the ambulance services have a key [to open the barrier],” said Gibis. The Bohemian mayor will also soon be given one – as will bus services that use the country road between the two towns.

A series of burglaries in his town over the summer reportedly racked up €20,000 worth of damage and some Haidmühle residents blamed the Czechs from the neighbouring village of Tusset, which lies six kilometres away in the region of Bohemia.

In an effort to tighten border security, police officers were placed on look-out but no thieves were spotted. After ten nights of fruitless surveillance, Haidmühle decided to act anyway and erected the barrier. But the Bohemian mayor was not informed and Czech representatives reacted angrily.

Pavel Kosmata, an official from the South Bohemian railway, wrote a satirical letter to the Bavarian town’s mayor, which he leaked to German and Czech media.

Turning the affair on its head, he quipped that the barrier should stay in order to spare the Czechs from “feisty [German] youths and virtuous [German] citizens that just come over to buy alcohol and cigarettes”.

Many Haidmühle residents, however, cannot see what all the fuss is about. Two pensioners who spoke to the Merkur argued that the road was only meant for cyclists and pedestrians anyway.

But the barrier has already proved dangerous for cyclists riding in the dark – even though a warning light is reportedly in use. “I almost rode into it,” complained one cyclist from Haidmühle. Another Austrian cyclist is reported to have crashed into it.

The controversial barrier, which flies in the face of EU legislation over freedom of movement will be keenly contested by the Czechs at the next tri-national European conference meeting between Lower Bavaria, South Bohemia and Upper Austria.